the last book I ever read (Zuckerman Unbound by Philip Roth, excerpt six) 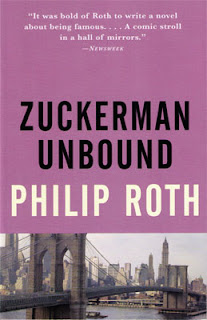 A young black man, his head completely shaved, stepped out of one of the houses with a German shepherd and stared down from the stoop at the chauffer-drive limousine in front of his alleyway, and at the white man in the back seat who was looking his place up and down. A chain fence surrounded the three-story house and the little garden of weeds out front. Had the fellow cared to ask, Zuckerman could without any trouble have told him the names of the three families who lived in the flats on each floor before World War II. But that wasn’t what this black man wished to know. “Who you supposed to be?” he said.

“No one,” replied Zuckerman, and that was the end of that. You are no longer any man’s son, you are no longer some good woman’s husband, you are no longer your brother’s brother, and you don’t come from anywhere anymore, either. They skipped the grade school and the playground and the hot-dog joint and headed back to New York, passing on the way out to the Parkway the synagogue where he’d taken Hebrew lessons after school until he was thirteen. It was now an African Methodist Episcopal Church.