a month of interviews 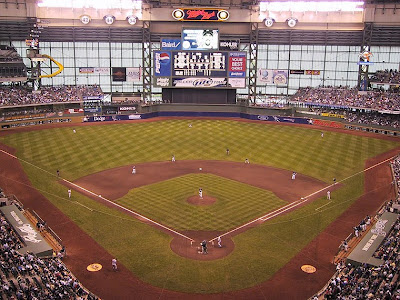 it's Opening Day, of course (today's weather cast a certain amount of doubt despite the fact that there was baseball on television), but also the last day of the month.

after that I transcribed for quite a while, and then I transcribed some more and then some more after that, wrote a bit, edited a bit more, turned the piece in and did some minor edits after that, and so in the first nine days of March I interviewed only one 49 year old, a lovely woman I knew way back in elementary school (hey Laura).

it's been a good month.
hello April.
Posted by Rob Trucks at 8:24 PM No comments: 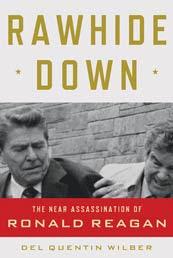 today is the 30th anniversary of John Hinckley's attempted assassination of President Ronald Reagan.
which is something I did not realize until around 10:45 last night as I was finishing reading Rawhide Down: The Near Assassination of Ronald Reagan by Washington Post reporter and first-time author Del Quentin Wilber.
also shot that day: Press Secretary James Brady, Washington D.C. Police Office Thomas Delahanty and Secret Service Agent Tim McCarthy.

"Sergeant Herbert Granger was facing the president when he heard the first cracks of gunfire. Whipping around, he spotted a blond man in a combat crouch. The gunman was holding a small revolver with both hands and firing at the president, tracking his target from right to left. Granger lunged toward the shooter, but his body felt strangely sluggish, as if he were moving through syrup. He heard screams and his own grunting, but they echoed in his ears like an audiotape being played on its slowest setting. He was puzzled by the gunman's blank and emotionless expression, then he watched as an elderly man in a yellow sweater raised his arms and slammed them down on the neck of the assailant. 'Kill the son of a bitch!' the old man yelled."

the last book I ever read: Rawhide Down: The Near Assassination of Ronald Reagan
the last album I ever bought (that's right - bought): The Mountain Goats' All Eternals Deck
Posted by Rob Trucks at 8:00 AM No comments: 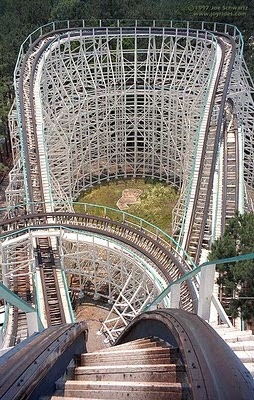 has been rather a rollercoaster.

very, very good friends in town with visits to the Museum of Modern Art and a wonderful meal at Fishtail by David Burke.

but there also have been some reversals, some about-faces, some misdirections and a heaviness that results in fruit so low-hanging that you end up dazed, bruised about the forehead for simply attempting to pass through the orchard.
and so the weight, at least for now, trumps the warmth.
and yes, that's probably my fault, my doing, but to be fair I did take my coping mechanism in for repairs two, maybe three weeks ago and the last time I called the woman who answered the phone said they were still waiting for a part to come in.

last movie I ever saw: It's Kind of a Funny Story
last book I ever read: Jacob Slichter's So You Wanna Be a Rock & Roll Star
last book I ever wrote: the Tusk book
if I was bi-polar and required to have two theme songs alternately play as I walked through the streets of Manhattan: "Under Pressure" by Queen & David Bowie and "The Only Living Boy in New York" by Simon & Garfunkel
Posted by Rob Trucks at 1:38 PM No comments: the Prime Minister of the Republic of Poland, Donald Tusk, is my new favorite government official.
at least until I find that I disagree with his politics, but that won't happen before tomorrow at the earliest because the NCAA tournament games have already tipped off (remember that the Tar Heels play the LIU-Brooklyn Blackbirds on CBS at 7:15 Eastern tonight).

and the Village Voice, on Rob Harvilla's final day as music editor, was kind enough to print 1448 words from the Tusk book right before I realized that fracturing an already fractured book about a definitively fractured album may not be the best way to draw people in.
Posted by Rob Trucks at 12:27 PM No comments: 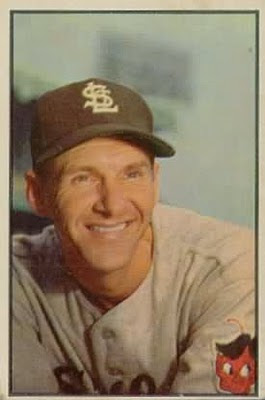 yes, it's St. Patrick's Day, and that actually means something well past the color green here in New York.
and yes, it's the first day (and right now the first thirty minutes) of the NCAA men's basketball tournament (and yes, I know they played two games on Tuesday and two games on Wednesday, but Thursday noon is when you have to have your bracket in) and that actually means a lot inside the walls of my apartment.
and yes, I promised a few days back that I'd write about something over than people dying one day, and one day that will happen.
but . . .

today is the one-year anniversary of the death of Alex Chilton in New Orleans. and less than 48 hours ago the Voice posted my oral history about the upcoming live re-creation of Big Star's Third led by Chris Stamey and Jody Stephens.
and not too long ago I posted links to the Deadspin remembrance of Alex's time in Tuscaloosa and the piece I wrote for the Voice on the night that Alex died.
but the sun's out, and if you're not stuck inside (voluntarily or not) watching basketball or trolling bands who will be making their own sounds in Austin, Texas, it feels like a really good day to do some driving, windows down with some Big Star cranking through the loudspeakers.

it's also time to remember Marty Marion, the National League's Most Valuable Player for 1944 who passed away last night at his home just outside St. Louis, Missouri.
Marty "The Octopus" Marion's entire career orbits the city of St. Louis. he played 11 years, including his MVP season, with the Cardinals, then parts of two seasons with the Browns (pictured above from the beautiful 1953 Bowman series) and served as a player-manager for three of those 13 years.
my great-uncle, Virgil "Fire" Trucks, played for him, alongside Satchel Paige and Don Larsen and Bobo Holloman, on that 1953 Browns team (and soon after the Browns moved to Baltimore and became the Orioles, but that connection will be strengthened later).
which how I managed to visit Mr. Marion, a kind and gracious man, in his home just about nine years ago, his MVP Award just over my left shoulder as I talked to him about his life and career.
Marty Marion is not in the Hall of Fame. and for whatever reason (though it absolutely has to everything do with the long-held belief that baseball was "watered down" during the war years) even his MVP Award is discounted by most. but keep in mind that Stan Musial was a teammate in 1944 and batted .347 that year. and whatever sportswriters who saw Marion play in 1944 also saw Musial play that season, but it was Marty Marion who went home with the trophy (more like a platter, actually).

but let's put the MVP aside for a minute, because Marty Marion's contribution to baseball history is much larger than what a platter can hold.
Marty Marion stood 6 feet, 2 inches tall, a comparative giant among shortstops of the 1940s (or '50s or '60s or even '70s), but he displayed great range defensively (remember, he was nicknamed "The Octopus") and proved that yes, you could be a big man and play shortstop.
it is said that Earl Weaver saw Marty Marion play. it is said that watching Marty Marion play shortstop is what gave Earl Weaver the idea to move Cal Ripken, Jr from third base (where he had played his entire minor league career) to shortstop.
Earl Weaver's in the Hall of Fame. Cal Ripken, Jr's in the Hall of Fame. and that experiment, to move a big man, against all conventional baseball wisdom, to shortstop, opened the door for not only Ripken but players like A-Rod and Derek Jeter and Troy Tulowitzki and . . .
it all started with Marty Marion.
Posted by Rob Trucks at 12:35 PM No comments: 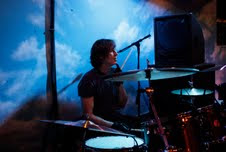 on March 26th at Mason Hall on the Baruch College campus here in New York, 35 musicians (more or less) will take the stage and perform Big Star's Third album the way it was recorded - with strings.

and I got to write a piece about it for the Village Voice, and in order to write that piece I got to talk to band leader Chris Stamey and R.E.M. bassist Mike Mills and conductor Ari Picker and sax/recorder/clarinet player Lisa Lachot and famed producer and Let's Active creator Mitch Easter and and Tift Merritt (you know, Tambourine) and Matthew Sweet (Girlfriend and Altered Beast) and original Big Star drummer Jody Stephens.
and each and every conversation (and and and) was a pleasure (at least on my end).

this re-creation is a huge deal, by the way, and Carolina won't be playing that night even if they get through their first two games (this posting is not a jinx) as they're in the Newark East Regional and those guys will play the 25th and 27th so you should really try to go if you're at all in the neighborhood.

and if you hate nothing more than Brussels sprouts but reading my writing for free comes in right behind Brussels sprouts on the scale of things you hate then you should know that the Tusk book is still for sale.
Posted by Rob Trucks at 9:49 PM No comments:

it's a rainy day in New York City 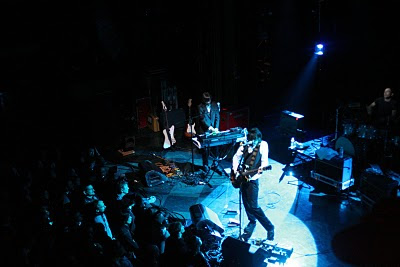 enough that the drops of water on the windows obscure any view of the outside world.
and that's all right.
and fitting, kind of.

Barry Hannah died on March 1, 2010.
Alex Chilton died on St. Patrick's Day 2010.
and a year ago today Mark Linkous of Sparklehorse shot himself in the heart near a friend's home in Knoxville, Tennessee. he was 47 years old.

here's an abbreviated interview I did with Mark back in 2007 for Phoenix New Times where he talks about his almost crippling depression.

(I will write about something other than people dying shortly. I promise.)
Posted by Rob Trucks at 12:16 PM No comments: 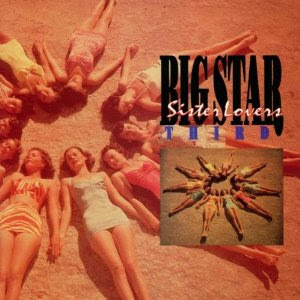 so while they've been shorter than usual (of course, none of these folks are 49), I've still conducted seven interviews over the past 32 hours and five in the past 7 hours alone.

and after chats with Chris Stamey, Mitch Easter, Tift Merritt, Mike Mills and Matthew Sweet (among others) I feel like I deserve some kind of Southern indie pop all-star through osmosis consideration.

all, by the way, will be part of the collective bringing Big Star's Third (Sister Lovers) to New York City on March 26th.
Posted by Rob Trucks at 6:10 PM No comments: