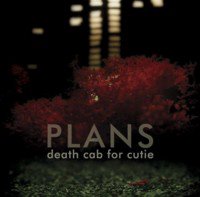 You'll really can't have too much Death Cab can you?

The band has cancelled their Halloween show in the hurricane-ravaged South Florida area, yet two versions of my feature interview with Ben Gibbard remain - the longer ran in New Times Broward-Palm Beach while the slightly abbreviated take appeared in Miami New Times.

Happy Daylight Savings.
Posted by Rob Trucks at 11:44 AM No comments:

song of the day: freakwater's "good for nothing" 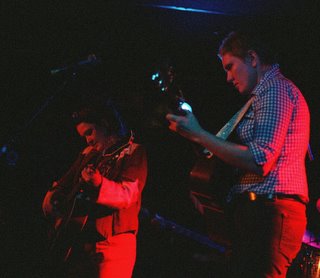 The Mercury Lounge, especially when full, is a tough place to take photos, but, hey, it was worth a shot.
And yet our photographic challenges had little effect on Freakwater's stellar, Smothers Brothers-esque performance (that's Catherine Irwin in the background (red) and Janet Beveridge Bean in the foreground (blue)) in New York on Thursday night.
We also very much enjoyed the opening set by John Parish and company.
Both John and Freakwater can be found domestically on Chicago's Thrill Jockey label (those with too much computer free time might want to consider entering the label's uber-unique Mash Up Contest (deadline November 9)).

Anywho, symbolic hats off to Freakwater. Which means we're making last night's opening number, "Good for Nothing" (from their End Time CD), our song of the day.
Posted by Rob Trucks at 6:33 PM No comments: 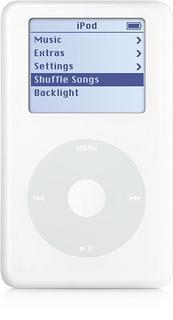 October 27th is the thirteen month anniversary of my iPod ownership. And following is a list of the top ten most played songs over that thirteen month period (make of it what you will):

song of the day: drive-by truckers' "(something's got to) give pretty soon"

And Happy Birthday to the Staten Island Ferry, 100 years young today.
Posted by Rob Trucks at 6:23 PM No comments: 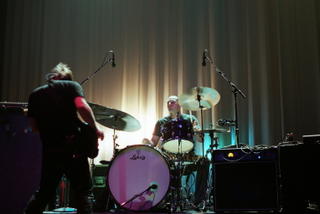 I saw Death Cab for Cutie at Hammerstein Ballroom here in New York last Wednesday night (the photo is of bassist Nick Harmer and drummer Jason McGerr). I interviewed Jason last Friday for a future drum project. And, assuming papers are actually published (given today's Hurricane Wilma landfall), both New Times Broward-Palm Beach and Miami New Times are scheduled to run my feature this week based on an interview with Death Cab leader Ben Gibbard.

And Civil Rights pioneer Rosa Parks died today in Detroit at the age of 92. God bless Rosa Parks.
Posted by Rob Trucks at 11:20 PM No comments: 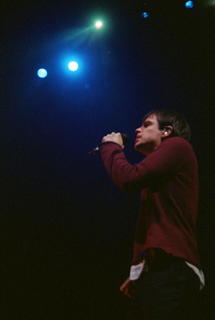 Tired.
Exhausted.
Meaning today's songs of the day are The Beatles' "I'm So Tired" and The Wrens' "This Boy Is Exhausted."
Not really.
Most of the past 24 hours has been awash in Death Cab for Cutie's Plans, as my piece was due this morning for a run in both New Times Broward-Palm Beach and Miami New Times next week. Then I began to move on to the second disc of Randy Newman's expanded Good Old Boys (a concert review is due next to No Depression) but it was muy dificil to hear the spoken sections on the subway.

The photo of Rivers Cuomo was taken last Friday night at the Foozer show at the lovely Continental Airlines Arena. Tomorrow night is the first of two Death Cab shows at Hammerstein Ballroom.

No rest for the weary.
Posted by Rob Trucks at 8:36 PM No comments:

a miserable day in nyc 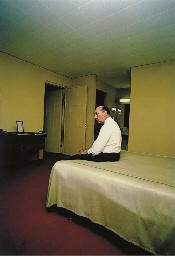 I guess Tammy's finally here. It’s raining buckets. Umbrellas are little defense.
All day I expect to be introduced to a man named Noah.

This morning I’m walking up the steps to the subway, listening to Randy Newman’s “I’m Dead (But I Don’t Know It)” from his Bad Love album. The entrance to the southwest corner is taped off. Upstairs it’s taped off in the other direction, effectively forming a cordon around a portion of the platform. A policeman is standing next to the upstairs tape and a homeless person is asleep in the blocked off area, except they’re probably not asleep, you know?

Last week my preview of Fall rock lit ran in Philadelphia Weekly, and Cleveland Scene was kind enough to reprint the Weezer piece.
And just out in New Times Broward-Palm Beach is a short feature on Fall Out Boy.

This week also marks the release of Daddy's Live at the Women's Club. The band is fronted by former bis-quits buddies Will Kimbrough and Tommy Womack. And I was fortunate enough to be in Frankfort, KY back in February when the album was recorded.

When I haven't been asleep, working the day job, writing, transcribing (right now an interview with Death Cab for Cutie frontman Ben Gibbard) or interviewing (most recently System of a Down drummer John Dolmayan), I've been scouring the Internet for photography (photo auctions are in progress at most of the New York houses) and just general info.
For instance, I can't wait to turn in the Shortstop book (boy, it's really weird to see your book listed on Amazon before you've finished writing it) so I can have the time to read Joan Didion's The Year of Magical Thinking. So I was looking to see if she had any book signings in the area and I came across an announcement that Spalding Gray would be reading from his new work, Life Interrupted: The Unfinished Monologue, but unfortunately I don't think there's much chance of that happening.
Posted by Rob Trucks at 6:27 PM No comments:

More house cleaning items to come, but before the League Championship Series start let me say:

Cardinals over the ChiSox in five
Posted by Rob Trucks at 7:55 PM No comments:

My Beloved and I are just about thirty minutes from hitting the Birmingham airport for the flight back to New York. And we've seen nieces and nephews and brothers and sisters and mothers and friends and in-laws and Randy Newman and Wallace & Gromit: The Curse of the Were-Rabbit (good; but not the greatest movie ever).

And also, just this morning, My Beloved ran across a really cool website: www.askmoses.com with an equally cool motto: Live! One-on-One. 24/6.

The site answers questions like "What is the significance of The Shofar?" Would've come in handy at the day job last week when a co-worker asked if it would be appropriate to wish her client a Happy Yom Kippur. I'm sure www.askmoses.com could've told us. 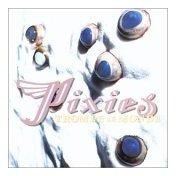 #1 Freakwater's "Loserville" from Thinking of You . . . (because I interviewed Catherine Irwin Wednesday night for an upcoming Cleveland Scene piece)

#2 Fall Out Boy's "Sugar, We're Goin' Down" from From Under The Cork Tree (because I turned in an FOB feature that'll run in New Times Broward-Palm Beach next week)

#4 Pixies' "Subbacultcha" from Trompe Le Monde (because last Sunday we drove up to Kingston, New York to catch the last show of the Pixies tour)

#5 The Wrens' "This Boy Is Exhausted" from The Meadowlands (because it's the song I want playing as family and friends exit my funeral)
Posted by Rob Trucks at 1:17 AM No comments:

I've spent too much time this morning dreaming of Lexington (I have my reasons), catching up by phone with long gone friends (always enjoyable but still, there's work to be done), avoiding both the broken rod in the closet and task of transcription (today - my interview with NL MVP shortstop Dick Groat).
But the transcribing is about to happen (albeit in front of the television - Yankees vs. Red Sox, Florida vs. Alabama). I swear.

My buddy and former roommate Inman Majors' wonderful (pun intended) novel Wonderdog has made it to paperback - a well-deserved feat. W'dog is funny and insightful (especially if you're caught in the gravitational pull of the ever growing class of lawyers who wish they weren't lawyers).
Consider this a recommendation to click on the cover art and pull out your credit card.
Posted by Rob Trucks at 1:36 PM No comments: