Dylan has a new album 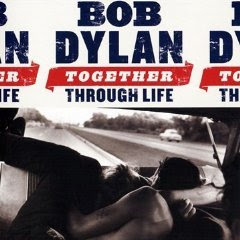 called Together Through Life.
supposedly it's his 48th.
this is hearsay.
I didn't do the counting myself.

he'll be touring the Midwest through Pennsylvania, New Jersey and even Connecticut this July.
minor league ballparks mainly.
Willie Nelson plays on all dates, and John Cougar Mellencamp plays most.
tickets for most shows go on sale this coming Saturday morning.
Posted by Rob Trucks at 8:22 PM No comments: 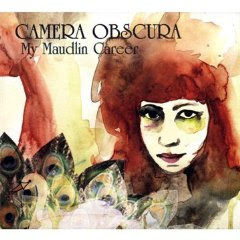 the new album by Camera Obscura, came out on Tuesday.
as did my piece on the band, based on a couple hour visit with lead singer/songwriter Tracyanne Campbell.
(caution: literary quotient of 8.4)

you may sample the aforementioned disc by clicking to your right (Charlie don't surf and the graphic above doesn't click).
Posted by Rob Trucks at 1:11 AM No comments: 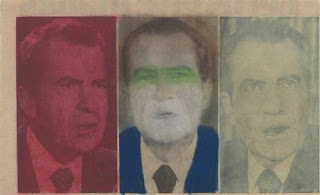 and last night I left the apartment for the first time in three and a half years (in people years that's about nine days since I left Queens, though I did go for a couple of long, enjoyable walks over the weekend) for the opening of The Pictures Generation, 1974-1984.
(New York brush with greatness: Salman Rushdie)
(I also met Paul McMahon (his image, "Untitled (Nixon)" is above); nice fellow)
and it was more than drizzling.

over the course of the night I ingested asparagus, pecans, Jack and Coke, chicken meatballs and shrimp wonton.
which possibly explains the internal (yet matching) dreariness.

no day baseball today (with more than a few rainouts in the offing this evening), and Rolling Stone (God help us everyone) has proclaimed Kings of Leon as "America's Hottest Band" on their cover.
puh-lease.
(my most recent (last Fall) interview with the Kings of Leon's primary songwriter. note: they have not, by any stretch of the imagination, cured all of their formatting ills from the recent Voice makeover)

so it seems only fitting that The Deerhunter's playing on my television as we speak.
Posted by Rob Trucks at 1:38 PM No comments: 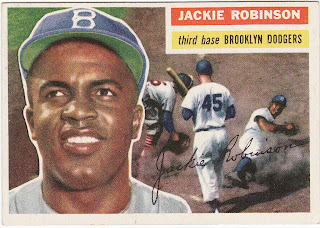 not the afternoon, by the way, to take your kid to his/her first ballgame to teach him/her about all the players since everyone will be wearing #42.

if you are what you eat, I will soon be a ham sandwich (Easter leftovers, don'tcha know).
Posted by Rob Trucks at 1:45 PM No comments: 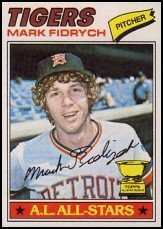 Phil Spector is pronounced guilty, Marilyn Chambers is pronounced dead, Mel Gibson's wife files for divorce (turns out they've been separated since just after his drunken, anti-Semitic tirade in 2006), Minnesota politician Norm Coleman loses the same U.S. Senate race to Al Franken for the fourth time (yet vows to file another legal challenge) and, of course, another round of Opening Days, including the Mets opening Citi Field the same way they closed Shea (with a loss; and the Yankees beaten so thoroughly by Tampa Bay that they used a position player, Nick Swisher (the team MVP thus far), as pitcher for the first time in more than a decade).

but the most relevant news to me was the third baseball death in less than a week. first was the Angels' Nick Adenhart, killed by a drunk driver just hours after the best start of his career. then Harry Kalas (what a voice) died in the broadcast booth in D.C. before the Phillies-Nationals game. and then during that game we learned that Mark "the Bird" Fidrych passed away this afternoon in an apparent accident on his New England farm. he was 54.

(neither Philadelphia nor Detroit were opening parks this afternoon. in fact, both teams hosted their respective Opening Days last week, but I couldn't help but be reminded that Willie Stargell passed away on April 9, 2001, the first day of major league play in Pittsburgh's PNC Park)

his bright, shining moment, of course (though his major league career wasn't much more than a moment in itself), came on June 28, 1976 when ABC broadcast its Game of the Week on Monday night (in apparent hope that they could extend their football franchise).
my friends and I went to our homes early that night to watch, didn't leave until it was over.
longtime Oriole Elrod Hendricks (and whose picture stays on this home page) hit a home run for the Yankees' only score of the ballgame.
I've linked to the boxscore (thank you, Retrosheet), but in no way does the boxscore do Fidrych justice.
he was special.
if ever the words "joy" and "baseball" occurred in the same sentence, there's a good chance that Mark Fidrych's name appeared there too.
we didn't get to watch him for long, but we're lucky we got to watch Mark Fidrych as long as we did.
Posted by Rob Trucks at 11:59 PM No comments:

we are the champions, my friends 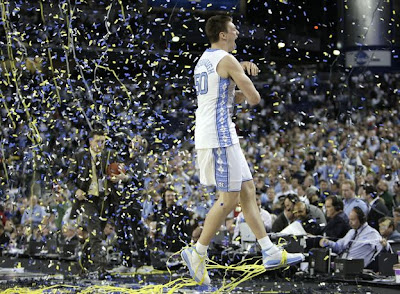 Carolina's going back to the championship game 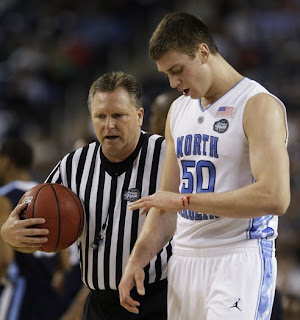 thanks to 14 first half minutes of exquisite basketball (about a minute and a half in until about four and a half left before halftime): swarming defense, transition offense capped by lights out shooting.

but if we get the same referees on Monday (Hansbrough's getting thrown to the ground without a call and six other non-whistles) and don't improve on the free throw shooting (a depth perception problem at Ford Field?) it could be a disappointing evening.