last concert I ever (almost) saw: the whigs and kings of leon 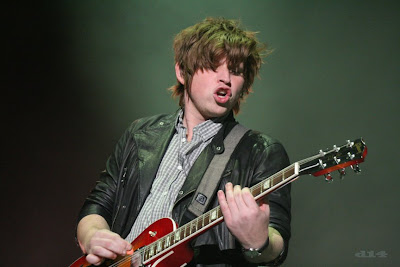 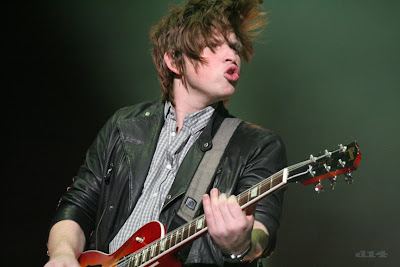 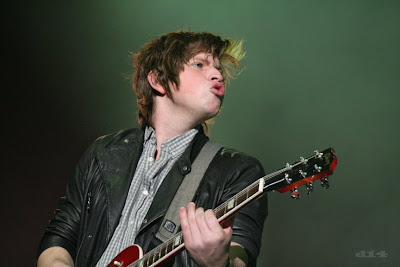 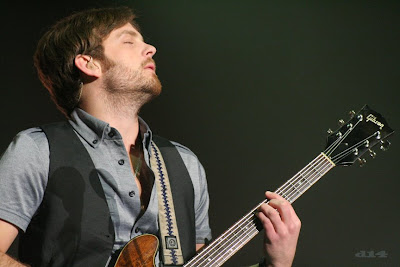 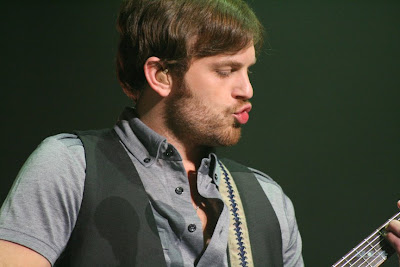 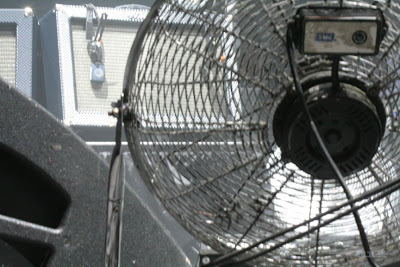 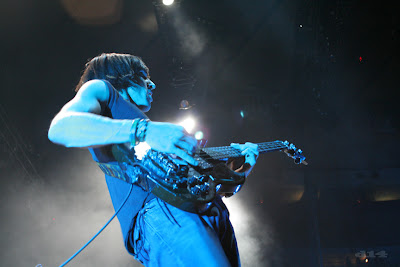 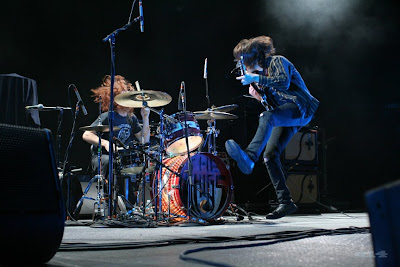 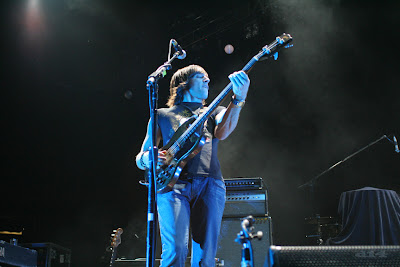 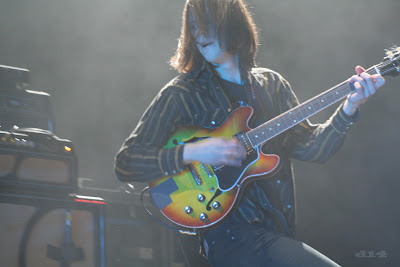 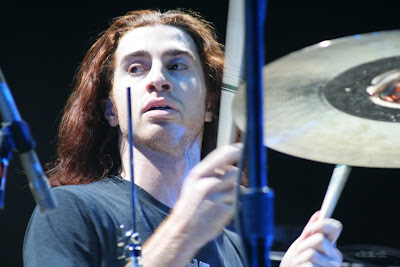 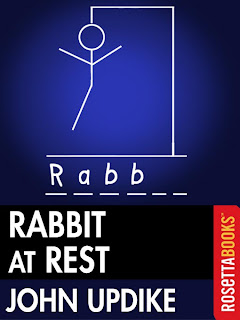 one day after John Updike died (and one day after Brandeis University announced that it would close its arts museum and sell off its holdings in an attempt to pay bills), the Washington Post announced that Book World, one of the country's few remaining stand-alone book sections, would publish its last issue on February 15th.

the arts need a bailout, man.
Posted by Rob Trucks at 4:07 PM No comments: 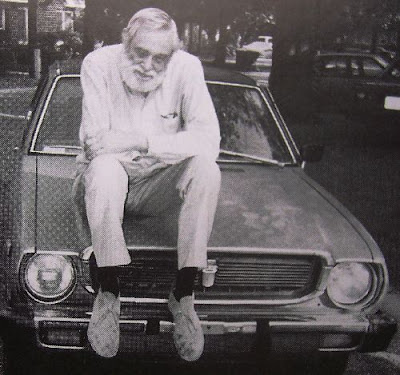 yes, I'm just under the wire of my self-imposed weekly deadline.

today's new releases include Franz Ferdinand (Tonight, which I'm listening to now), Bruce Springsteen (Working on a Dream) and the Bird and The Bee (Ray Guns are Not Just the Future, which Amazon was offering as a $3.99 download; pretty strange for the day of release).
at least that's what allmusic.com chose to feature.
none of which really competed, review-wise, with last week's superfecta of Animal Collective (Merriweather Post Pavilion), Antony and the Johnsons (The Crying Light), A.C. Newman (Get Guilty) and Andrew Bird (Noble Beast).
guess your name had to begin with A to get a good review last week.

yesterday I turned in a piece on Will Oldham (a/k/a Bonnie "Prince" Billy) for Anthem magazine (I believe it's for the March issue when BPB's Beware is released).
and from assignment (we skipped over the pitch part for this one) to final edits (when everything is usually over (but not this time), the process has been (how you say) interesting.
though Oldham is a notoriously difficult interview (his mother once described his demeanor with press as "ornery"), the hour I spent with him was actually quite enjoyable. the subsequent two weeks however . . .
it's a long story (much longer than the piece itself).
maybe I'll tell you about it some day.

Monday contained other complications as well. a couple of very, very short trips into Manhattan, a hair cut, and a variety of more insular activities too small to merit mention.
but all combined they were more than enough to make me tired, tiresome and willing to rationalize a less productive day today.
but for some reason I became a bit despondent while watching Conan O'Brien on "Inside the Actor's Studio."
yeah, I know. I'm not exactly sure why I was watching Conan O'Brien on "Inside the Actor's Studio" except to say that I'm sure my attention was somehow flagged by the fact that Conan O'Brien is not an actor.
and yes, I have been known to turn to programs that I realize in advance will not make me happy.
stubborn? probably.
genetic? at least partly.
and "Inside the Actor's Studio" came on before the news that John Updike had died.

now Updike was 76 years old and had published more books than I will even if I live to be 376 (boy, that would suck). I didn't particularly identify with his style, his setting, his characters (though I did teach his short story, "A & P," about a hundred times to second semester freshman English students (and I didn't even teach freshman English (I don't think) my last three or four years of teaching)).
still, a man died. a famous man died. a famous writer died.
and there is no joy there.
continue feeling despondent.

my former next door neighbor in Tuscaloosa, Mark Hughes Cobb, has written a very nice piece on Richard Yates (he wrote the novel Revolutionary Road on which the movie is based) and his final apartment, at 1104 15th Court in Tuscaloosa (just about a three-minute walk (if you cut through a couple of backyards) from the our adjacent houses).
the piece was published yesterday (Yates died in 1992), which makes his quote regarding Updike retrospectively cold and ironic.
more death. more writer death.

it's late (much later than when I started because this Bonnie "Prince" Billy thing doesn't look like it's over yet), so basketball will have to wait.
Posted by Rob Trucks at 11:59 PM No comments:

the annual Pazz & Jop issue is out 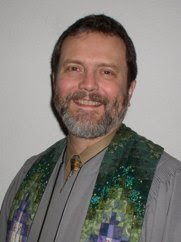 and thusly, as there was thankfully little clean up to do, I have worked my last day at the Voice's offices. we celebrated (the issue, not my departure (at least I don't think so)) with lunch at Japonais (pretty damn good).

and while folks (at the Voice) were really nice and I'm thankful for the experience (I arrived after the Charles Aaron debacle, but still have my own stories to tell) it was time (or past time) to go home (if nightmares of continuously scrolling Pazz & Jop entries accompanied by nausea as I experienced just about 20 hours ago is any indication).

on to my own writing, interviewing, etc.

(the above photo is of Dr. Charles Aaron, pastor of the First United Methodist Church of Farmersville, Texas and not Charles Aaron of Spin and faulty e-mail fame. I did locate one picture of the aforementioned Charles Aaron, but I like the Farmersville image better.)
Posted by Rob Trucks at 11:31 PM No comments:

a day of new beginnings 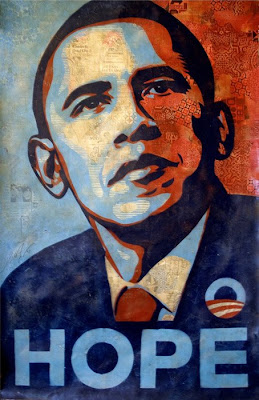 Posted by Rob Trucks at 2:20 AM No comments:

(insert your own title here) 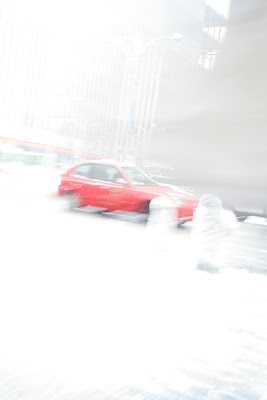 we're less than a couple hours away from two full weeks since my last posting. and the world, except for the economy on the whole (and the stock market in miniature), didn't even pretend to come to an end.

but in that time (since my last posting) North Carolina lost their first two conference games (to Boston College who has lost its four games since and to Wake Forest who stands alone as the country's last undefeated college basketball team) and won their next two (Virginia and Miami).

a US Air jet landed in the Hudson and a private plane landed, unadorned by so much as a pilot (he had parachuted out over the Childersburg, AL area), came down in some Florida Panhandle scrub brush.

I worked right at 100 hours over 12 days trying to help the Voice's annual Pazz & Jop issue come together, and saw John Doe and Exene Cervenka perform as an acoustic duo for just their second time on my only true night off.

I also saw The Dark Knight and Burn After Reading (on DVD, of course) and a bunch of Weeds episodes.

I conducted my second interview ever at the Algonquin Hotel (the first was Elizabeth McCracken several years ago), and listened to a whole bunch of music (and the extra commuting time allowed me to finally finish the awkwardly entertaining The Making of the TVA by Arthur E. Morgan (the first chairman of the agency)).
it seems that there is other computer work out there besides transcribing interviews (which does kind of occupy your ears), and if you do it at an alt-weekly no one has a problem with you spending the days wearing earbuds, particularly if you're working on an annual music issue.

in case you were wondering what a music writer with fewer assignments than usual (two that were assigned two weeks ago disintegrated while another formed overnight like a mushroom) listens to while working on a 2008 year-end critics' poll.
Posted by Rob Trucks at 2:25 AM No comments:

yep, it's the new year 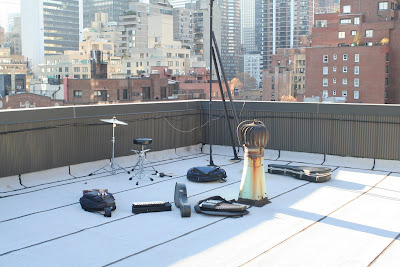 and if you're a careful reader you will notice that, yes, it's now four o'clock in the morning and even I should be in bed.
(I was. It didn't take.)

three full 24-hour cycles have passed and the only thing that all three have in common is that I have done some transcribing (Possibly 4th Street interviews with Chris Simpson (Zookeeper) and Jim Fairchild (All Smiles) and a Tusk (book) interview with A.C. Newman - pretty good progress for what could be termed holidays (not that freelancers actually have holidays) if I say so my own self - and watched at least part of one or another football game (boy, Utah kind of took it to Alabama, didn't they? I wouldn't have believed a Mountain West team was faster than an SEC team had I not seen it).
which, I guess, means, that despite my fondness for new beginnings, 2009, at least, has been overwhelmed with the soundcheck syndrome.
that is, a lot of hurry up and wait.

I wrote a piece or two for Grant Alden when No Depression was still alive and kicking, but probably ended up hiring him (a short-term Internet venture I was editing) more than the other way around because I'm such a big fan (still) of his writing.
and so even though I have exactly zero pleasant personal experiences with the here today, gone tomorrow, oh we're back again Oxford American, I did visit their site to read Grant's latest piece, "Lost Calling," which I can, of course, heartily recommend.

and anyone yearning to relive their more youthful prog rock days would be well-served to hit Amazon.com by day's end (I'm guessing midnight PST) since The Yes Album (the whole thing) is being offered as a mp3 download for a mere 99 cents.
Posted by Rob Trucks at 4:00 AM No comments: