those of you who have met my younger brother Wayne know that he is a kinder, gentler, taller, more athletic, less ornery version of myself. even though we look nothing alike.

those of you who have not met my younger brother Wayne should know that he is a kinder, gentler, taller, more athletic, less ornery version of myself. even though we look nothing alike.

the winner will receive a $50 gift certificate to Dreamland and two tickets to this year's Iron Bowl (for those non-Southern, non-football fans out there, that's the annual Alabama-Auburn football game and it's a very big deal within the state's borders). and I believe my brother Wayne, intelligent and nice guy that he is (remember he's a kinder, gentler, taller, more athletic version of myself (even though we look nothing alike)), is more than deserving of this honor.

so please take 30 seconds to follow this link and cast your vote for Wayne Trucks as Armchair Quarterback (the voting booth is not the easiest to find; look up and to the right, just underneath the channel 42 banner/masthead).
and if you've got more than 30 seconds, vote twice, three times, tell your friends and even your enemies. there doesn't seem to be a limit on how many times you can cast, though voting does end at 1 p.m. EST this coming Wednesday, so please don't dilly or dally.

I thank you.
Posted by Rob Trucks at 2:15 AM No comments: 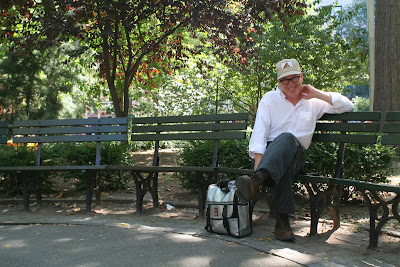 or at least a new soundtrack to a Lambchop concert film that I haven't seen.
so guess what I'm listening to.

(link to 15-month old interview with Kurt Wagner)
Posted by Rob Trucks at 11:45 PM No comments:

if I were live-blogging 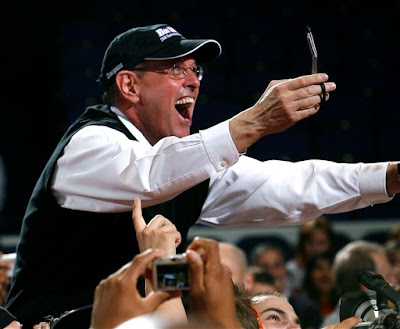 ESPN's 2009 College Hoops Tip-Off Marathon (which I'm not but someone must be attempting to cover all twelve games, all 24 hours) I would have to mention that Cal State Fullerton coach Bob Burton really needs to change barbers.
though in no way similar in style, Burton may well possess the worst basketball coach combover since the Big Ten tandem of Lou Henson and Gene Keady.
it's just, well, angled in a completely nonsensical fashion, like some kind of limp and lifeless, poorly applied triangle.
but his team took down the storied UCLA Bruins for the first time in school history (in double overtime) so I'm sure he's feeling fine despite any unnecessary roughness of my part.
just in case I'm presenting a relatively flattering photo of Burton with baseball cap.
looking a bit Boeheim, I'd say.
congratulations coach.

and know that I'll be changing barbers soon myself.
a long overdue whacking took place earlier this evening, and while the cut itself was fine (so says my spouse who has to look at it more than I), the stylist went nuts with the product, the gel, the spray, the accoutrement and possibly the lacquer (attempting, I guess, to polish my own bald spot so that it shone like a bowling ball on league night) so that upon returning home I had to go straight to the shower as I could no longer stand to smell my own head.
and without the comfort of a win at Pauley Pavilion.
and I didn't even beat UCLA tonight.

a final Fullerton note:
despite a rather persistent (as in multiple) typo on the official Cal-State Fullerton basketball website, the Titans' recent transfer from the University of South Florida is named Orane Chin, not Orange Chin.
though that would be pretty cool and certainly share a lot of Google searches with Chad Ochocinco.
Posted by Rob Trucks at 2:44 AM No comments:

"there are no angels in america"

over the weekend we watched all six "chapters" of Tony Kushner's Angels in America.
a good thing considering it was gone from HBO On Demand on Monday morning.
Posted by Rob Trucks at 11:37 PM 1 comment:

as a general rule 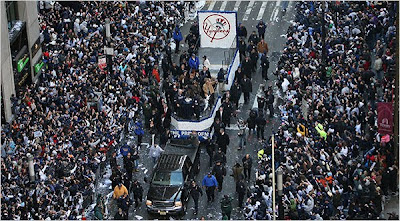 televised parades are a bad idea, but the Fox5/My9 shared telecast of today's Yankees celebration is particularly atrocious.
it's almost as if no one had prepared.
lots of network time-killing interviews with screaming fans (most predicted a 28th championship next year in and around shout-outs to family and friends).
one correspondent admitted knowing "nothing about baseball" but bragged that she knew Jeter, Pettitte, Posada and Rivera had played together for a long time.
when they did manage to grab a Yankee for an interview, the default question was "what do you want to say to New York?"
and poor Phil Hughes was trapped for so long that we learned that his breakfast was "good," which led to the follow-up: what did you have? (a bagel).
we also learned that police, fire fighters and sanitation crews were doing "a good job" and that "nobody throws a parade like New York."
Fox morning co-host Greg Kelly (whose father just happens to be the NYC police commissioner) spent most of his time trying to shake hands ("put her there") with players who actually strayed close enough to the barricades designed to keep Kelly and his partner out.
another of Kelly's co-workers tried to interview the police officer keeping her from the players lining up to board their respective floats.
the officer's response: just stay over there.
and if we could collect a dollar for every "there goes (insert name of Yankee player here)," several of us could retire comfortably.
Posted by Rob Trucks at 12:06 PM No comments: