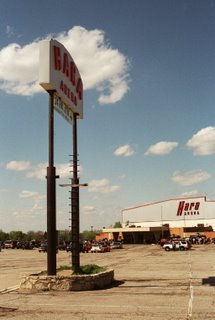 there's no connection between the two (other than being together in my very own head) that I know of. unless you're willing to play one of those kindergarten-era "how are these things alike?" games.

because Peter Pan, obviously, stands out because of his ability to fly (sure, there's all the "never grow up" stuff, but the ability to fly is like a superhero power - very rare - while I know plenty of folk who refuse to grow up) and Dayton has labelled itself "The Birthplace of Aviation" given that Orville and Wilbur Redenbacher (just kidding) entered the world somewhere inside the city limits of, or somewhere near, Dayton (even though their best-known accomplishment took place in The Tar Heel State).

(I must admit that even though I know Kim, and know that she's from Ohio, I don't believe I would've guessed Dayton as her place of birth)

we learned just last Sunday that Hawthorne Heights was from Dayton. the band had the third of five slots on the Fall Out Boy tour stop at Hara Arena (see photo above) and much was made backstage about their return home.
for the Fall Out Boy set I positioned myself in the VIP section behind the main soundboard and so was nearby a rather drunk boy wearing a Hawthorne Heights pass who insisted on taking the chair of one of FOB's soundguys. following the show the same guy could be seen skulking out of the HH dressing room, ostensibly hiding leftover sodas and beers under his shirt.
but he wasn't exactly inconspicuous (like Tom Hulce's grocery store run in Animal House) and post-show no one gave a rat's ass anyway.

more opinions about Dayton: it is definitively divided into north and south and the south is the nicer area of town (where Books & Co. is located). Hara Arena is on the north side. as is the airport (which is carpeted with a biplane motif). and while there is an airport hotel, you'd have to be there to know it (no Internet info that I found) so we stayed at the clean and relatively affordable Hampton Inn in Huber Heights (the ice machine on our floor was non-functional, but that's about the worst thing I can say about the stop). and the TSA staff at the Dayton Airport were very likely the most conscientious and convivial that I've run across in my travels (a rare and appreciated thing).

so what the hell does this have to do with Peter Pan?
not much.
but a couple days after our return from the midwest (Ohio's the midwest, right?) I ventured to New York Public Library to return books and CDs and happened across the relatively new Guided by Voices bio by James Greer which I'm now reading.
I also stumbled across a DVD copy of Finding Neverland which I'd never seen so I brought that home as well.
we watched FN on Thursday night (very touching) and then last night noticed that a cable channel well up the dial was showing Peter Pan (the '03 version) which neither my spouse nor I had seen (hell, neither of us had ever seen any kind of production of Peter Pan). and it seemed a little like kismet so we watched (at least I did - she fell asleep).
much harder to recommend. Peter was too damn cute to be likeable and to be honest I had no idea that there was supposedly to be a coming-of-age, puppy love thing betw him and Wendy. and that was a little disconcerting.
guess I should study up on my "classics."

last book read: Cari Lynn's Leg the Spread(okay)
book before that: How Israel Lost: The Four Questions by Richard Ben Cramer (highly recommended)
book before that: Mike Schmidt's Clearing the Bases (not so much)
Posted by Rob Trucks at 10:04 AM 1 comment:

to ask for more 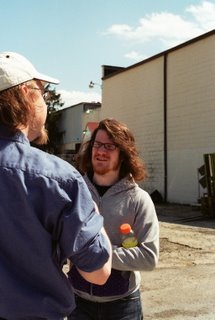 would border on the greeditudinous, for the past four days have been significantly full.
book signings in Cincinnati, Lexington and Dayton (where a very gracious Bobby Durnbaugh and family were in attendance), a live appearance with the more than hospitable Lance McAlister on 1360 Homer, some very nice weather (not so much on Friday), long overdue visitations (and red wine) with friends Friday and Saturday, hanging out with Fall Out Boy in Dayton on Sunday (that's me with drummer Andy Hurley up top) and a Van Morrison concert in New York City less than 24 hours later.
and while many would be choose a different dessert after all that activity, I settled for the doctor-recommended gastroscopy.
he says I'll live. thanks for asking.
Posted by Rob Trucks at 6:58 PM No comments:

a new review of Will Blythe's To Hate Like This Is To Be Happy Forever: A Thoroughly Obsessive, Intermittently Uplifting, and Occasionally Unbiased Account of the Duke-North Carolina Basketball Rivalry, written by New Republic editor Franklin Foer, is now up on the New York Times website.

Posted by Rob Trucks at 7:25 PM No comments: 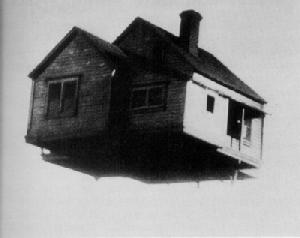 actually we've never been to Kansas. we swear.
(why? is something missing?)

(the television show, Elvis, starring Michael St. Gerard as Elvis and Millie Perkins as his mother Gladys, really was a good 'un)

and there's a storm a-comin' to NYC.
the wind is Kansas strong, enough to knock drawings by nieces off the refrigerator and blow the amaryllis off the window sill, scattering potting soil throughout the kitchen.
and there's really nothing more satisfying than spending a Saturday morning collecting strewn potting soil.

morning listening, both work-related: The Books' Lemon of Pink (for an upcoming Cleveland Scene piece) and Gomez' How We Operate (for No Depression)

happy birthday Gerald Uggen and Sheelagh Bevan . . .
Posted by Rob Trucks at 10:39 AM No comments: