I just sometimes don't know anymore what to think even

music on the way to the day job: Black Lips' Good Bad Not Evil (to be released September 11th)

I sometimes don't even know just what to think anymore 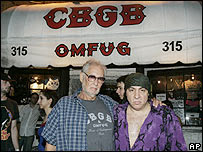 the second anniversary of America's most shameful moment since the Civil War.

the muffle-mumbleth anniversary of my mother-in-law's birth.

both Hilly Kristal and Richard Jewell passed away.

and it was revealed that Leona Helmsley left twelve million dollars to . . . (wait for it, wait for it) . . . her dog.

and speaking of Country, Bluegrass and Blues, today was day one, the first, the initial, the inaugural venture into what I hope (expect) will be a series of pieces on . . . well, maybe we ought to wait a little while longer before breaking the news.

but thanks nonetheless to the good folks (specifically Pat and Rachel) of Oakley Hall for their adventuresome spirit and participation.
the band will begin their tour next Tuesday night at Maxwell's in Hoboken and finish up about six weeks later at the Bowery Ballroom in Manhattan (roughly 4.7 miles apart through the Holland Tunnel). and if you can't make one of their many, many shows in between, then purchase their album, I'll Follow You, out September 11th on Merge Records.
Posted by Rob Trucks at 9:11 PM No comments:

sometimes I just don't even know what to think anymore 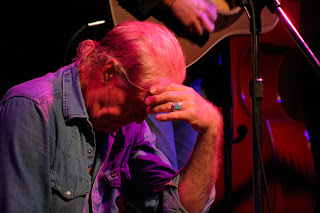 oh yeah.
a feature this week for the Houston Press on Billy Joe Shaver (muchly cut down from what I turned in as the extended length opportunities at the Voice have sure enough spoiled me).
an assignment that also caused me to rub elbows with Beyonce's daddy, Mathew Knowles.

last movie I ever saw: Under the Yum Yum Tree with Jack Lemmon, Carol Lynley, Dean Jones, Imogene Coca and Paul Lynde.
you can skip this one. it doesn't age well.
Posted by Rob Trucks at 12:08 AM No comments:

I just don't even know what to think anymore sometimes

and now Grace Paley's dead (Max Roach's funeral is tomorrow morning at The Riverside Church) and Arthur Bremer's getting out of prison.

song of the day (surprisingly enough): Violent Femmes' version of Marc Bolan's "Children of the Revolution" (from their Blind Leading the Naked album)

last review CD to arrive in my mailbox: The Apples in Stereo's New Magnetic Wonder

next concert in my neighborhood (and concerts never occur in my neighborhood): the Fiery Furnaces this coming Sunday at Socrates Sculpture Park (just about twelve blocks from my apartment, but I'll probably be in Hoboken)
Posted by Rob Trucks at 11:02 PM No comments:

and in other news . . .
exhibit #37 in our continuing series, Why The Upper West Side Is Whacked:

woman with a Kucinich 2008 button is talking across the aisle to a man, most likely her husband, on the downtown 1 train. between them is the beginnings of a rose bush that they're obviously hauling from a way uptown nursery. but where to?
they discuss, loudly, who will be taking it, and where (his office? her office? how about home?), once they reach the West 4th stop (and the 1 train doesn't stop at West 4th).
but the train lurches and a youngish woman falls backward, tripping over the beginnings of a rose bush that is blocking the aisle. as in, her ass is less than a foot away from the ground (with her head soon to follow) when her companion makes a shoestring catch.
woman with Kucinich 2008 button says to the falling woman: Don't do that.

if I was a Chinese traffic cop, I'd likely be dead by now

Reuters reports that state media in China has revealed that, according to an eight-city survey, the life expectancy of a Chinese traffic cop in the city is 43.

pollution seems to be the primary culprit, though stress, traffic noise and standing in the sun for long periods of time also appear to be contributors.

thank God I usually take along a lawn chair when I'm outside.
Posted by Rob Trucks at 12:19 AM No comments:

(yes, I realize that it's the 62nd anniversary of the bombing of Hiroshima, but I figured that'd be mentioned at least a couple of other places) New York City police started a riot (videotaped, thank you) when they attempted to clear Tompkins Square Park of its resident homeless. 44 people were injured.

just about 34 months later the park (named for former Vice-President to James Monroe, Daniel D. Tompkins (that'd make him our 6th VP; he also has a Staten Island elementary school named for him)) was closed for restoration, which gave the city a good excuse (and opportunity) to finally clear the homeless out.

happy anniversary.
Posted by Rob Trucks at 8:35 PM No comments:

probably (though Warren Zevon believed (correctly, as it turns out) that Life'll Kill Ya).

but recently, at least the past few days and weeks, if not months, life, both personally and out there in the world (steam pipe explosions, bridges collapsing), has seemed pretty damn random, arbitrary.
which makes life pretty damn frustrating.

so I do what I always, usually, mostly do: send a flurry of random, arbitrary e-mails and then retreat.

(retreating's fun; one of my favorite things actually)

but one evening of doing laundry, washing dishes, actually walking to a new Chinese restaurant (a Halal Chinese restaurant?) in the neighborhood for take-out (rather than simply calling for delivery), then coming home to watch DVDs (what turned out to be four episodes of Season Three of The Sopranos even though we haven't seen Seasons One or Two; I guess we're trying to catch up on the pop culture we've somehow missed. so what's next? seven volumes of Harry Potter books?) despite the fact that we still haven't convinced the PlayStation 3 and the television to talk properly to each other, made sense, a balance of work and relaxation, at least for a night.

I took the photo that runs alongside Harvilla's Down in Front column in the Voice this week (some photogs work the Police at MSG; I shoot kids dancing in front of Escort at the Stuy Town Oval).

and Wednesday I submitted a Kelly Willis piece to Kansas City that subsequently went through damn near innumerable transformations, including several last minute changes, all the way until Friday morning. enough that I'm not sure what to think about the piece now, though I'm pretty sure I've irrevocably skunked up the tone. very frustrating that. the one speck of redemption I can point to is my non-gratuitous mention of the vaunted Whac-A-Mole game (admittedly more fun in an arcade, perhaps at Chuck E. Cheese).
you try working Whac-A-Mole into a Kelly Willis piece for Kansas City.

at least one previously unpublished Morrissey photograph is up at last concert I ever saw, with some Kelly Willis and Billy Joe Shaver to follow shortly (probably).
Posted by Rob Trucks at 10:30 AM 1 comment: