the last book I ever read (Philip Roth's The Anatomy Lesson, excerpt six) 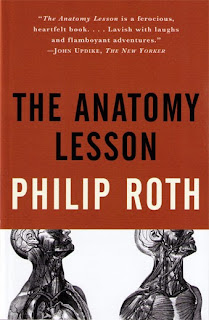 “Okay—let’s say you even manage to, which I doubt. By the time you’re worth anything you’re going to be damn near fifty. You’ll have plenty of companionship, but you’ll have no recognition, and how the hell are you going to like that when you’re fifty?”

“You’re wrong. I had the recognition. I had the public. In the end it doesn’t do anything to the public, but to me it did plenty. I sentenced myself to house arrest. Bobby, I have no desire to confess or to be taken for a confessor, and that was mostly where their interest got stuck. It wasn’t literary fame, it was sexual fame, and sexual fame stinks. No, I’ll be content to give that up. The most enviable genius in literary history is the guy who invented alphabet soup: nobody knows who he is. There’s nothing more wearing than having to go around pretending to be the author of one’s own books—except pretending not to be.”