the last book I ever read (Philip Roth's The Ghost Writer, excerpt one) 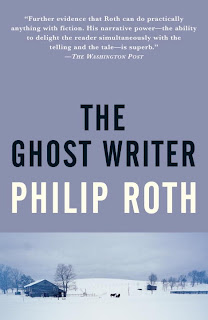 And not just from a father who was an artist instead of a foot doctor, but from the most famous literary ascetic in America, that giant of patience and fortitude and selfishness who, in the twenty-five years between his first book and his sixth (for which he was given a National Book Award that he quietly declined to accept), had virtually no readership or recognition, and invariably would be dismissed, if and when he was even mentioned, as some quaint remnant of the Old World ghetto, an out-of-step folklorist pathetically oblivious of the major currents of literature and society. Hardly anyone knew who he was or where he actually he lived, and for a quarter of a century almost nobody cared. Even among his readers there had been some who thought that E. I. Lonoff’s fantasies about Americans had been written in Yiddish somewhere inside czarist Russia before he supposedly died there (as, in fact, his father had nearly perished) from injuries suffered in a pogrom. What was so admirable to me was not only the tenacity that had kept him writing his own kind of stories all that time but that having been “discovered” and popularized, he refused all awards and degrees, declined membership in all honorary institutions, granted no public interviews, and chose not to be photographed, as though to associate his face with his fiction were a ridiculous irrelevancy.