but now ma's in her kerchief and I'm in my cap, the tickets to St. Louis have been cancelled and we're settled in for a long winter weekend of free (yes, free) premium cable (Freedomland, The Upside of Anger and Wedding Crashers thus far and it's not even two a.m.).

yeah, we don't get out much.

but we did hear that Saddam Hussein is dead.
Posted by Rob Trucks at 1:19 AM No comments: 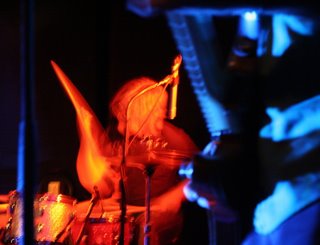 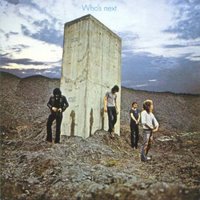 not to outcrass my artwork, but these things do tend to occur in threes. so after the consecutive passings of the Godfather of Soul and the nation's 38th President, who's next?

got the answer?
then e-mail it to: robblog2005@yahoo.com, subject heading: Dead Before 2007. the winner will feel bad and receive some crappy gift of my choosing that probably won't be worth the time it took to compose the e-mail.

he's not gone before 2007, but my New Times Broward-Palm Beach music editor, Jason Budjinski, is leaving his post soon enough. my final two assignments for him, a longish interview with Hourcast's Patrick McBride and a shorter one with distant cousin Derek Trucks, are up this week.

before 2007 I must finish a Stephen Malkmus feature for Phoenix New Times and submit my Pazz & Jop ballot to the Village Voice. and make a fricking plan, dude. so much to do, so little time.

the last days of pompeii (or tower records) 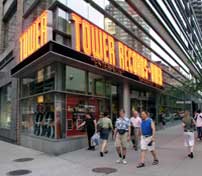 so late yesterday afternoon, while on a quest for Ornette Coleman CDs at NYPL's Performing Arts branch, I stopped off at Tower Records by Lincoln Center. I believe that today is the final day that particular store will be open, so the few CDs that remained (kind of like getting picked last for a dodgeball game) were listed at 80% off. but what began with scavenger hunt anticipation (anything's possible) quickly turned into "we've already been to ten garage sales this morning and now I just want to go home and watch football" realism (yeah, anything's possible but all they have in this neighborhood is Reader's Digest and polyester muumuus).

I picked out maybe twelve discs after scouring pretty hard for at least the first twenty minutes, and pared by half before I reached the sales clerk. here's the list:

John Parish and Polly Jean Harvey's Dance Hall at Louse Point (import) for $4.40
Jon Langford's Gold Brick for $3.40
The Volebeats' Solitude for $3.00
Rhett Miller's The Believer for $2.00 (which for some reason was more than 80% off the marked price)
Billy Bob Thornton's Hobo for $3.60
Nine Black Alps' Everything Is for $2.60

but is it really saving $82.94 when the purchases didn't fill any particular holes in my lineup? not to get into the whole music as luxury vs. necessity thing, but I'm pretty sure I went in hoping for Ornette Coleman's Beauty Is A Rare Thing box, a couple of Lambchop I'm missing, and Richard Buckner's two MCA releases, Since and Devotion + Doubt.
obviously I didn't land what I wanted/needed.

I already have the Nine Black Alps downloaded but I really like the album (am I the only one? nobody but nobody paid attention to that record. and sure, they sound like a Nirvana-Oasis love child but, you know, that ain't all bad). the Billy Bob is pure perverse curiosity (I've never heard any of his music). the Parish-Harvey co-release is curiosity, but less perverse (I saw John Parish play a little over a year ago and like the little recorded stuff I've heard). no way I'm buying the Rhett Miller unless it's deeply discounted, but Jon Langford's pretty consistently good. probably most excited about finding the Volebeats (I reviewed Country Favorites when it came out and have been filling in the back catalog when I come across it).

still, not a good sign when the closing of a national chain of record stores and the bargains that instills elicit little more than a ho-hum. it seems the world has changed and I've changed with it.

last book read: Travelling People by B.S. Johnson (good luck finding a copy)
last DVD I can recommend with almost no reservations: New York Doll
last celebrity sighted in NYC: Rick Moranis (you win some, you lose some)
last musician interviewed: Stephen Malkmus
next set of photos to be post on The Last Concert I Ever Saw (probably): The Black Keys
Posted by Rob Trucks at 3:06 PM No comments:

don't make me tell you again about the scooching

the quote's from Christopher Walken.

the hole in the back (and thigh and eyelid) is mine.

(note: the above photo is not actually my arm (or back or eyelid or thigh) or Christopher Walken's, but it is an example of stitches after a punch excision performed on neither myself nor Christopher Walken (though we both have Astoria connections (as does Tony Bennett and the dermatologist) (blah blah blah))

Yo La Tengo photos are up at The Last Concert I Ever Saw
Posted by Rob Trucks at 11:37 PM No comments:

a lovely day in nyc 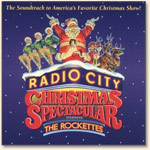 but interviews with Paul Weller and Stephen Malkmus are in the can, done, over with, finished, complete.
Posted by Rob Trucks at 11:29 PM No comments: 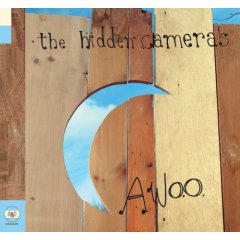 Know that when the various and sundry members of Canada’s Hidden Cameras exit the stage from their final performance of the year they will, in all likelihood, be smiling. Not only because they can taste a well-deserved vacation from touring, but because the Cameras are that rare indie pop band whose live show is decidedly dance-inducing, evidently exuberant, and giddier than any group with a glockenspiel has a right to be. In a word, joyous.

Broad grins will adorn the respective visages of whirling dervish violinist Jamie McGregor, keyboard moppet Laura Barrett, as well as the Camera’s court jester of a drummer Lex Vaughn. In fact, every single one of the seemingly countless Cameras will most likely be buoyantly beaming. Except for band centerpiece Joel Gibb.

It’s not that Gibb is unhappy exactly. It’s just that his role as Hidden Cameras frontman stretches as broadly as the grins of his backing troupe. See, Joel Gibb is the Cameras’ lead singer, songwriter, guitarist and record producer. He does all band interviews, owns the record label and has conjured every sketched piece of artwork found on the band’s three albums. He gets by with a little help from his friends, but Gibb, for all intents and purposes, is Hidden Cameras. And while the aggregate of his efforts yields an unquestioned control, it is, at times, a heavy burden to shoulder.

“I don’t think I’m a freak about it,” says Gibb from Stuttgard, Germany, “but I think it’s really important to control your art and to control the destiny of your ideas, you know. That doesn’t mean you have to be a dick about it.”

And truth be told, despite the travail of leading a slew of happy, happy bandmates through eleven countries, thirteen States and seven Canadian provinces over the past two months alone, it is the attempted control of the destiny of his ideas that weighs most heavily.

Over the course of the Cameras’ first two albums, Gibb penned a number of lines that, well, pretty much guaranteed a certain amount of notoriety. Lines like, “As well, it is the smell of old cum on the rug” and “I drank from the wine that came from inside/The heart of his meat and the splurge of his sweet” and “I kissed his ugly gangly greens/He swallowed my pee” and “ My golden bone meets the golden bun/Buns held high in our dreams of men.” Lines that rendered Gibb as the personification of that most uncommon union of alt-folk and sexual frankness.

Not that there’s anything wrong with that. But in this substantially sexless, genitalless genre (can you imagine Belle & Sebastian or, god forbid, The Decemberists abandoning coy wordplay and euphemism in favor of such directness?), lyrics like Gibb’s wave a proverbially red flag.

But it may be what’s made Gibb so damn tired.

Nevertheless, Gibb’s role is exacerbated by fervent followers drawn to his unique perspective, but one step towards tossing the albatross of meticulous meaning, it would seem, is the Cameras’ latest album Awoo.

“I always wanted to name an album that was nonsensical,” Gibb says. “And that’s what the record’s kind of about. It’s like nonsensical.

“It plays with the idea of nonsense, not only in talking about the idea of language being a lie and nonsense but actually a song like “Lollipop” where I’m actually delivering it in a nonsensical way, even though they’re all words and I’m actually saying the words but it comes out all mumbo jumbly, so I thought the name 'Awoo' sort of reflected some of those ideas.”

Like Lewis Carroll’s epic poem “Jabberwocky” (`Twas brillig, and the slithy toves/Did gyre and gimble in the wabe:), the Cameras’ latest is accented by the apparently ambiguous: songs like the twitter-tongued “Lollipop,” “Fee Fie,” and the catchy title track, “Awoo,” which is liable to attract an audience more accepting of the less explicit.

It’s “something in between” a sound and a word, says Gibb of “Awoo.” “That’s why I like it. It’s a sound I like to sing. It’s like a song, but it also can have a meaning. But I like the idea of a word not necessarily having some specific meaning in a specific language.”

Following the band’s final show in Cleveland, Gibb, like the rest of the Cameras, will head to Toronto. But then Gibb will move on to Philadelphia, followed by New York where his art will hang on the walls of a Lower East Side gallery. Just after Valentine’s Day he’ll arrive back in Germany.

“Going away to Berlin is a great way to just be alone, and to reflect and to work on stuff,” he says. “You can’t always be performing, you know. You have to recharge a little bit sometimes.”

Meaning sometime in February, somewhere over the Atlantic on a transcontinental flight, a little less controlling Joel Gibb may look ahead and, like his bandmates, smile.
Posted by Rob Trucks at 12:30 PM No comments: 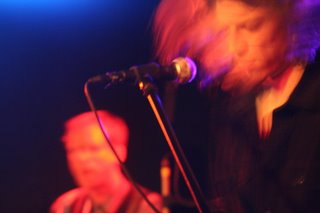 more, less impressionistic, Pernice Brothers photos are up now at The Last Concert I Ever Saw
Posted by Rob Trucks at 2:18 PM No comments:

interviews last night with Derek Trucks (on tour with Eric Clapton in Japan) and Patrick McBride of Hourcast (at home in Kansas City). next Tuesday with Paul Weller in England. this morning just a windy walk through 18 degrees (which is just much too cold to walk through).
Posted by Rob Trucks at 3:22 PM No comments: 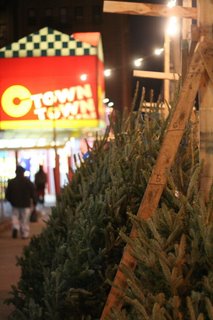 shut out (at the door) of Owen's opening set at Irving Plaza.
not Mike's fault.
shut out (just inside the door) of a dermatologist appointment
(of all things).
I should really have taken a picture.

and oh, so very, very much more (see photo).