the last book I ever read (Jim Thompson's The Killer Inside Me, excerpt two) 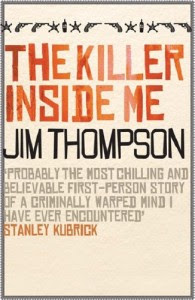 from The Killer Inside Me by Jim Thompson:

There wasn’t any more work I could do, so I filled a big cup with coffee and took it up into Dad’s office. I set it on his desk, lighted a cigar and started browsing along the rows of books.

Dad always said that he had enough trouble sorting the fiction out of so-called facts, without reading fiction. He always said that science was already too muddled without trying to make it jibe with religion. He said those things, but he also said that science in itself could be a religion, that a broad mind was always in danger of becoming narrow. So there was quite a bit of fiction on the shelves, and as much Biblical literature, probably, as a lot of ministers had.

I’d read some of the fiction. The other I’d left alone. I went to church and Sunday school, living as I had to live, but that was the end of it. Because kids are kids; and if that sounds pretty obvious, all I can say is that a lot of supposedly deep thinkers have never discovered the fact. A kid hears you cussing all the time, and he’s going to cuss, too. He won’t understand if you tell him it’s wrong. He’s loyal, and if you do it, it must be all right.