how to spend your early spring weekends

well, in the morning you quietly (because your beloved is still asleep) research The Breeders (because you have a phone interview with Kelley Deal Monday afternoon). the most interesting find, thus far, is a 2002 Dutch television program called "The Real Deal."


then, after a quick bite to eat (probably a Trader Joe's "this fig walks into a bar . . . " cereal bar), you watch a movie, either No Country For Old Men, which was not disappointing in the least despite your longtime affection and high expectations for both Cormac McCarthy and the Coen Brothers, or Into The Wild, an overly long, overly romanticized (kind of like the title) yet still interesting film directed and produced by Sean Penn.

and then there's basketball (don't mention taxes; let's don't talk about taxes; la la la la la: I can't hear you when you say taxes (other stuffs to be avoided: laundry and grocery shopping)), especially the Tar Heels' a little too close for comfort win over Louisville.

(by the way, I might've been sandbagging a bit on my basketball picks. going into Sunday's games, I have one bracket in the ESPN pool (with over 3 million entries for the men's tournament) ranked at 1,173 (greatest assist: two victories by Western Kentucky; worst damage: Davidson and Villanova's multiple wins and South Alabama's failure to win even one), and one bracket on the women's side ranking 613 (last miss: Notre Dame over Oklahoma, otherwise my Sweet Sixteen would've been perfect))

last four CDs to arrive in the mail: Dennis Wilson's Pacific Ocean Blue (2 CD Legacy Edition) (out June 17), Stanton Moore's Emphasis! (On Parenthesis) (out April 22), Heloise & The Savoir Faire's Trash, Rats & Microphones (out April 29) and Apples In Stereo's Electronic Projects for Musicians (out this Tuesday)
Posted by Rob Trucks at 9:58 AM No comments:

"'Drive-by Truckers' on every one or maybe just 'DBT'" 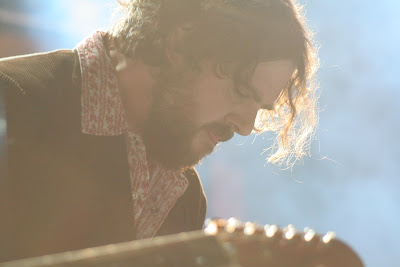 it's a bit dreary and wet outside (not that that really has any effect on me) and my left ear's still ringing from last night's Drive-By Truckers show at Terminal 5 (Harvilla's unsafe-for-work-titled blog covers same and contains a couple more of my pics).

the Truckers are in Philly tonight, on their way home. I will be happily ensconced in my own domicile watching the Tar Heels take on the Cougars.
Posted by Rob Trucks at 2:08 PM No comments:

my bracket's got a hole in it 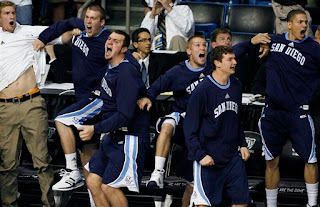 yes, I picked Davidson and Western Kentucky and Kansas State and even San Diego.
but I had Clemson and South Alabama advancing to the second round (I think two number two seeds, Tennessee and Duke, aren't making the Sweet Sixteen).
so more than likely, the dishes are done, man.
for while all of my Elite Eight picks are still alive, only fourteen are possible for the Sweet round.

(if you're looking for something to read/watch/see in between games, or even at night (tomorrow everything will be over by 8 EST), the Shout Out Louds episode of "Possibly 4th Street" posted yesterday afternoon)
Posted by Rob Trucks at 1:56 PM No comments:

you can indict a ham sandwich but you can't tuna fish 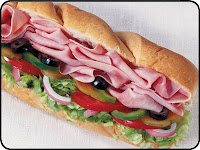 more than three months after her husband's death, Janet Redmond-Mercereau has been indicted.

those investigating the case had pretty much zeroed in on Ms. Redmond-Mercereau from the beginning as shortly before dawn on a December morning, Douglas Mercereau, a New York City fire marshall, was shot in the head three times with his own service revolver while his wife and two young daughters slept in another room.

Ms. Redmond-Mercereau claimed that she didn't hear the gunfire because she was wearing earplugs. prosecutors say that she didn't call 911 until more than two hours after the shooting because she not only took "several" showers but also ran the gun through the dishwasher.

Mario Gallucci, lawyer for the accused, expected the indictment all along.
"You can indict a ham sandwich," Gallucci said.

which is news to me.

(the sky above New York, by the way, is brilliant tonight. deep blue, despite the hour, fronted by a glowing, almost completely full moon and fast-moving, dark, yet pink-bottomed clouds. if only there wasn't so much work to do.)
Posted by Rob Trucks at 2:26 AM No comments:

well now, this really should be the signature image for "possibly 4th street" - probably 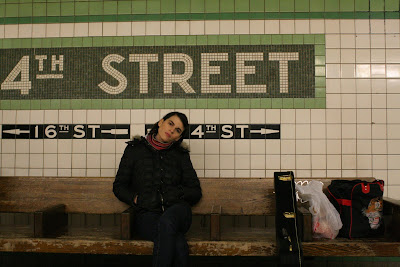 but first, let me apologize. yes, I've been away (or away from the blog). I have not, however, literally been away. in fact, I've left Queens only once (and blogged only once) since the sun came up last Friday.

and that's not a bad thing.

in case you don't feel like leaving Queens (and are one of those strange Americans who do not appreciate college basketball), here's some free reading (and watching and listening): parts One and Two of Kaki King (on "Possibly 4th Street," see above) for the Village Voice and the full monty on the Mountain Goats for Philadelphia Weekly.

go Belmont!
Posted by Rob Trucks at 5:37 PM No comments:

it's 1:36 a.m. and I really should be working on a book proposal, but I just learned that 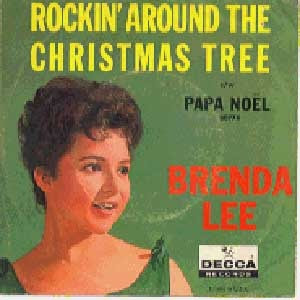 Brenda Lee follows the Breeders on my iTunes library.

I'm listening to Title TK because the Breeders' upcoming Mountain Battles arrived a couple of weeks ago and I've been listening to it a lot and then about 45 minutes ago I realized that while I've listened to Mountain Battles a decent amount in the past couple of weeks and Last Splash about a million times in the course of my all too long existence, I really haven't spent that much time with Pod and almost none at all with Title TK.

so I'm reading news all over this wonderful Internet (mainly not very interesting posts by folks who are at SXSW and truth be told I enjoyed the post by the Beggars Group employees who didn't get to go to Austin more than anything I've read tonight by someone who's actually in Austin (though I appreciated Camille's picture of the food court)), and at some point Title TK ends because all of a quick sudden I'm listening to "Rockin' Around The Christmas Tree."

and I am quite surprised.

anyway, the Christmas album (I've written more than a few Christmas music pieces in my time (and most of them were pretty fun if I remember correctly) is the answer to your silent, rhetorical question:

You have Brenda Lee on your iTunes?
Posted by Rob Trucks at 1:37 AM No comments:

market's down, taxes are due, SXSW has started without me (and I'm guessing I won't even get a lousy t-shirt) but basketball's just getting started

of course I'm having no luck finding either the ACC or SEC tournaments on my cable system. and if I can't watch basketball, what good is it being home?

I'm back to work (I interrupt folks' "welcome backs" with "it's just one day, it's just one day") and obviously big bosses are in town because I'm covering the phone of one of their assistants.

I'm talking with an older gentleman, unsteady in his speech AND on a cell phone. he gives me names, but changes them (Ingrid Florenstein becomes Hildegard Sorenstam and the like), he gives me phone numbers but they don't have enough, or have too many, digits. like 434-956-637. and when I ask him to repeat, it's of course my fault.

but I do hear him clearly when he says, "you're really serious about your job, aren't you?" in a completely sarcastic voice.

I'm really fine with the market, taxes (and laundry) can be pushed off until another day, and I'm pretty sure I'd rather be at home watching basketball than doing the SXSW thing. I'm not so good amongst crowds and Harvilla's already written that R.E.M. wasn't so good.

actually he said that "the dudes are looking a bit peaked. Wearied. Old, is what I'm saying."

of course Harvilla's still a young whipper-snapper, still shy of 30 while I'm, well, I think I graduated high school the same year as Michael Stipe.

yipes!!! (only because it rhymes)
Posted by Rob Trucks at 9:23 AM No comments:

over 700,000+ MySpace page views since the New York Times provided a direct link shortly before six p.m. EST (update: at 9 a.m. on 3/13 her MySpace views have passed 4 million, a number I expect will rapidly rise once folks start arriving at their workplace computers).

and though she may be "moving back with her family in New Jersey," I doubt she'll find time “to relax.” and I'm pretty damn sure she won't be picking up shifts at "a friend's restaurant."

because all three will happen.
let's just hope she doesn't get a book deal. 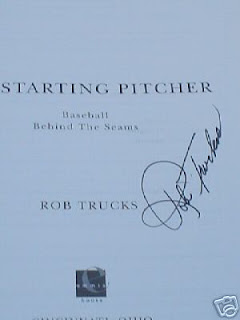 it's only raining here.
but Birmingham's got an 82 percent chance of an inch and a half of snow tonight.
looks like we left the South just in time.
(and we managed to get the fried catfish in, albeit covered in crawfish etoufee, which was fine with me)

(work)day #5 away from the day job, though really it felt like the first as we didn't get back from Mississippi until Wednesday night and yesterday was full of trying to get my upcoming Mountain Goats feature for Philly just right.
(and it probably wasn't just right because I had a lot of good material but only 1000 words to cram it all in. and rather than presenting something that looked all crammed in I decided to leave some stuff out. but I may share the extra here around the time the piece runs)

and this is funny: strange enough that someone would be auctioning off an autographed copy of The Starting Pitcher on eBay, but downright hilarious that someone would go to the trouble of forging my signature (trust me, that's not my autograph)
Posted by Rob Trucks at 5:35 PM No comments: 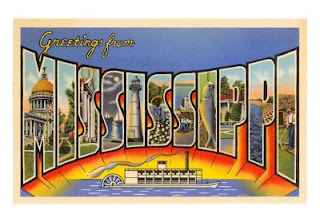 we've eaten barbecue and sushi and slaw dogs and chicken biscuits from Chick-Fil-A (no fried catfish yet), visited Square Books and Rowan Oak and a few innings of an Ole Miss baseball game out in right field with seemingly half the University's Greek system. funny, that.

but the beautiful weather (upper 60s and sunny) is about to end. 24 hours of rain is forecast, there are tornado warnings to the west (and the storm's moving east) and the temperature goes down into the lower 30s this evening.

but the Possibly 4th Street session with Say Hi went live on Friday. and the recording's better than usual, and worth a look.
Posted by Rob Trucks at 12:09 PM No comments: