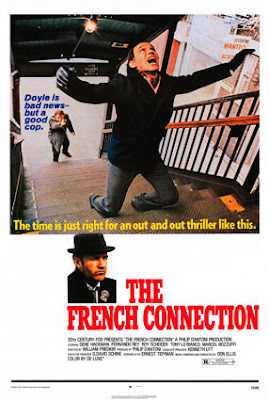 The French Connection comes on HBO Signature at 11:45 EST.
try not to pick your feet in Poughkeepsie.
Posted by Rob Trucks at 11:17 AM No comments:

when last we chatted, major world events - the funeral of Edward M. Kennedy, the fourth anniversary of Hurricane Katrina and the like - greatly overwhelmed the thorn in my paw that is Time Warner Cable.

but the funeral's over and the fourth anniversary has passed.
so has the 48 hours the Time Warner customer service representative assure me was an outside window for restoration of my MLB Extra Innings package.

not so, home slice.

on Monday afternoon (and yes, there were day games on Monday) I called Time Warner Cable (of New York, specifically Queens) once again and once again I received the "call volumes" heavier than normal message (if anyone EVER calls Time Warner on a service related issue and does not get that message, does not have to suffer through a minimum ten minutes on hold (and yes, I'm over my cell phone minutes per month limit), please shoot me an e-mail), but I waded/waited through in order to say, Hey, that 48 hours you promised is long since gone and still no baseball.
Monday's CSR started stuttering about company policy on the two-day credit (when I deserved at least seven), and if there's anything you don't want to try my patience with it's policy. because, as we all know, just because something's "policy," does not make it right.

I said, Look. Forget about the two-day/seven-day credit issue. We're talking about a difference of five dollars here. How about fixing my baseball channels?
so we moved on and we did the little dance where he remotely rebooted the system (even though I had rebooted before I called) and of course it didn't work and he couldn't figure out what was wrong or why IT hadn't responded to the previous Friday night's "ticket," so after (call it) thirty minutes he promised to bring my situation to the attention of a floor supervisor, expedite the IT ticket and seemed to completely understand why I didn't really want to call back, why I didn't really want to spend 15 minutes (give or take five) on hold before giving periodic phone updates like, No, it's a blank screen. Still a blank screen. No, nothing, to a third CSR before ultimately hanging up without resolution.

do I need to tell you that 4 o'clock came and went without a phone call from Time Warner?

do I need to tell you that Monday night and Tuesday passed without a phone call from Time Warner?

do I need to tell you that channels 431 through 444 on Time Warner Cable of Queens' system, the channels that are supposed to be covering every Major League Baseball
game live, are all completely black on my television?

of course, I still don't want to spend another 15 minutes on hold, another 30 minutes of ineffectual troubleshooting with a climax of misleading information, if not outright fibbery.

what are my options?

how about sending an e-mail on Tuesday night which said, Look, you guys misled, misconstrued and it's obvious by now that you're either unwilling or unable to fix the problem, so just credit my account for the rest of the season and let me put this nightmare behind me.

when you hit Send, by the way, the website tells you that you'll receive a response within 48 hours.

not that a response time of 48 hours is anything to brag about (they respond to e-mails in 48 hours, when you call they suggest that you'd be better off calling back later - it's pretty obvious that Time Warner Cable DOES NOT WANT TO HEAR FROM THEIR CUSTOMERS except in the form of a monthly check).

and my screen is still black.

THE POWER OF YOU, my rapidly aging arse.
Posted by Rob Trucks at 11:08 PM No comments: