the last book I ever read (Pastoralia by George Saunders, excerpt five) 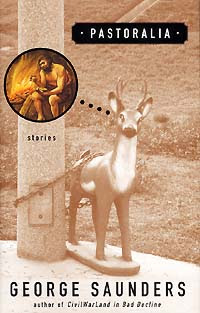 from Pastoralia by George Saunders:

Outside the tinted window were a little forest and a stream and an insurance agency and a FedEx drop-off titled by some pipeline digging. There were six students. One was the barber. One was a country boy with a briefcase, who took laborious notes and kept asking questions with a furrowed brow, as if, having been caught speeding, he was now considering a career in law enforcement. Did radar work via sonar beams? How snotty did someone have to get before you could stun them with your stun gun? Next to the country boy was the Buggin’ girl. Next to the Buggin’ girl was a very, very happy crew-cut older man in a cowboy shirt and bolo tie who laughed at everything and seemed to consider it a great privilege to be here at the Driving School on this particular day with the particular bunch of excellent people, and who by the end of the session had proposed holding a monthly barbecue at his place so they wouldn’t lose touch. Across the table from the Happy Man was a white-haired woman about the barber’s age, who kept making sly references to films and books the barber had never heard of and rolling her eyes at things the instructor said, while writing Help Me! and Beam Me Up! on her notepad and shoving it across the table for the Happy Man to read, which seemed to make the Happy Man uncomfortable.