the last book I ever read (The Stench of Honolulu by Jack Handey, excerpt six) 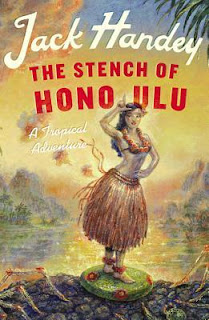 You can’t help thinking about the families of the pirates. Every night a pirate’s “old lady” would be patiently waiting for him at the back door. But never again would she hear the gentle tap of his peg leg on the porch, or hear him blaspheme when he saw the dog chewing on his spare peg.

She would gather her children round and try to explain, as gently as she could, that their father wouldn’t be coming home, that he was stabbed in the belly, then he was shotgunned in the back, then an arrow went through his head, then he was blown up, then he was grabbed by an alligator and shaken back and forth like a rag doll before a giant eagle stole him from the alligator and carried him off to her nest, where he was pulled apart and fed to the eagle babies. Who excreted him.