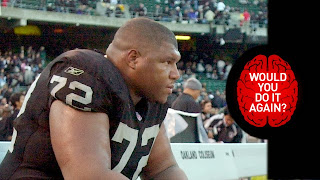 "The thing is, when the five years is up on a former player, and the medical insurance is gone and you're on your own, there are things – I know this firsthand, personally – that will be excluded if you try to go to a private insurance carrier and get covered. The joint surgeries and everything else? They won't cover them. So what is a guy to do? What is a guy to do about his brain when he takes his medical records and he's asked, 'How many concussions did you sustain? Three or more? Two or more?' What's the cutoff? When will a private carrier say, 'Well, we can't insure that'?"﻿

it's Friday afternoon somewhere (actually, it's Friday afternoon here), which means it's time for another interview with one of the more than 4500 former NFL players who have filed suit against the League over concussions and other head injuries. today we talk to former Atlanta Falcons and Oakland Raiders offensive lineman Lincoln Kennedy.