former New York Jets quarterback Al Woodall, the twelfth interview in Deadspin's Would You Do It Again? series 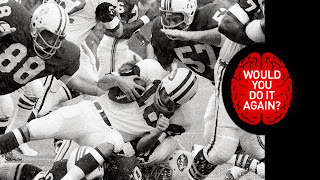 "I remember we played in Buffalo, and it was actually, I think, the last offensive play, which actually I threw a touchdown. And I got my bell rung, definitely, and I was on the ground, got helped up, walked off the field with some help, and that was the end of it. Nobody ever said anything to me. I got on the bus and there weren't any seats left so I was standing in the aisle, and one of the coaches said, 'Hey, we've got a guy here that got hit in the head. Somebody let him sit down.'"﻿

day four in a row of interview with some of the more than 4500 former NFL players who have filed suit against the League over concussions and other head injuries. today we talk to former Duke University and New York Jets quarterback Al Woodall.