former Atlanta Falcons linebacker Buddy Curry, the eleventh interview in Deadspin's Would You Do It Again? series 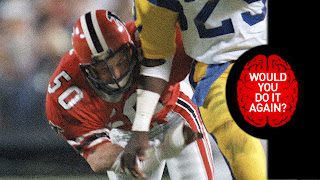 "It's a scary deal, because you don't know about the subconcussive hits. You don't know how these things could affect you, are going to affect you in the future. This kind of protein has been built up in these players' brains. It'll scare you to death. If you look at it that way, what you're doing is waiting."﻿

the third interview in three with an idea towards two more between now and Super Bowl weekend. we'll see. but for now our conversation with some of the more than 4500 former NFL players who have filed suit against the League over concussions and other head injuries continues with former University of North Carolina and Atlanta Falcons linebacker Buddy Curry.