former NFL defensive end Jim Skow, the eighth interview from Deadspin's Would You Do It Again? series 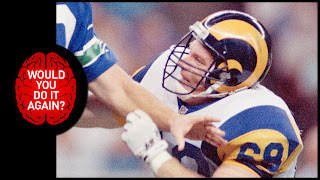 "I remember the outside guard pulled, and when he pulled he actually dinged my head with his knee. It was pretty hard [laughs]. I remember standing on the sideline and the thought that came to my head: 'The kid that sat next to me in first grade's name was Paul Brown.' I had never remembered that, ever. Never [laughs]. And all of a sudden it came to me. I'm like, 'Yeah, that hit didn't do me any good.'"

our conversation with some of the more than 4500 former NFL players who have filed suit against the League over concussions and other head injuries continues with current lawyer and former Bengals, Buccaneers, Chargers, Rams and Seahawks defensive end Jim Skow.