the last book I ever read (Moments with Chaplin by Lillian Ross, excerpt one) 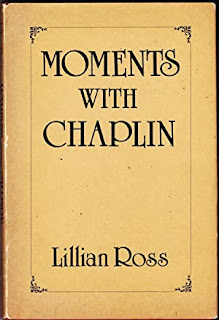 from Moments with Chaplin by Lillian Ross:

Charlie Chaplin was the first international movie star. He was also the first movie figure to be widely regard as a denius. Through all the decades since Chaplin’s arrival in Hollywood in the early years of motion-picture history; through all the changes and developments that have taken place in the industry with the advent of sound, color, new cameras, new dollies, the wide screen, stereophonic sound, big studios, no studios, big budgets, little budgets, big and rich producers, little and poor producers, big-star pictures, no-star pictures, big agents, the bankers in the background, the tie-ins with books, the tie-ins with records; through the rise of the director, the rise of the movie writers, the rise of movie-theory jargon, the rise of intellectuals as custodians of the art of “film,” the rise of college courses in “film,” the rise of the lecture circuit on “film,” the rise in the power of the stars, and the superpower of the superstars; through the strain to compete with television, the strain to cooperate with television; and through the countless technological advances—through every thing, Charlie Chaplin has persisted as a gigantic, incomparable figure. His pictures have by now been seen by billions of people all over the world. For many years, Chaplin’s life, like that of many movie stars, was disrupted, or at least thrown into confusion, by publicity of one kind or another, but at the age of fifty-four he married Oona O’Neill, the daughter of Eugene O’Neill, and with her he settled down into a period of astonishing serenity, which lasted as long as he lived. I first met the Chaplins in Hollywood, at a party, in 1948, when they were living in Beverly Hills with the first two of their eight children, and I continued to see them from time to time over the subsequent years. Their home always served as a refuge from the Hollywood frenzy, a very nice refuge—with a tennis court, a pool, and regular Sunday outdoor teas—which they shared graciously with other refugees of all kinds, both foreign and domestic. It was great fun for me, for one thing, to talk in a relaxed way with guests like Jean Renoir, James Agee, and Carol Matthau in that setting. For another thing, I spend some pleasant hours on the Chaplins’ tennis court, playing with (or against) Chaplin, who always played to win.