the last book I ever read (Mr. Tall: A Novella and Stories by Tony Earley, excerpt one) 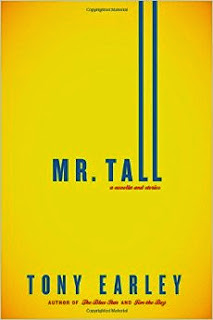 An hour and a half into their journey the road tunneled through a hollow so thick with balsam and rhododendron that they could see neither the sky above their heads nor the rushing stream whose echo hissed in the leaves all around them. Once they climbed out of the hollow Plutina noticed that the woods continued to hiss even though they had moved out of earshot of the creek. It had begun to sleet. The tiny, flat hat that she wore with her wedding suit was mostly ornamental, and within minutes her hair began to freeze. Plutina’s hair had never once froze before she married Charlie Shires and set off on a mule into the wilderness, so she pushed his forearm away from her breasts. Back in Weald, Henrietta would be cooking supper, probably chicken. Their father would be reading and rattling the Asheville paper, which came without fail every afternoon on the train. He was more than likely grumbling about Herbert Hoover to anybody who would listen. Now Henrietta was the only possibility. Plutina had always felt a little sorry for President Hoover, but because he was a Republican (an affiliation that could get you shot in Weald on certain days of the year) she had never said so out loud. With the hand she wasn’t using to hold on to the mule, she reached up and patted her stiff hair. But honestly, how could the problems of an entire country be the fault of just one moon-faced man? Shouldn’t people at least be nice to him because he was trying? Plutina found the state of the world too much to think about with frozen hair, so she decided to go ahead and cry. If Charlie noticed her sobbing he never let on.