the last book I ever read (My Autobiography by Charie Chaplin, excerpt one) 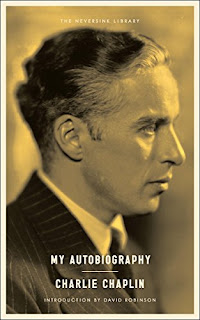 Winter was approaching and Sydney ran out of clothes; so Mother made him a coat from her old velvet jacket. It had red and black striped sleeves, pleated at the shoulders, which Mother did her best to get rid of, but with little success. Sydney wept when he was made to wear it: ‘What will the boys at school think?’

‘Who cares what people think?’ she said. ‘Besides, it looks very distinguished.’ Mother had such a persuasive way that Sydney to this day has never understood why he ever submitted to wearing it. But he did, and the coat and a pair of Mother’s cut-down high-heeled shoes got him into many a fight at school. The boys called him ‘Joseph and his coat of many colours’. And I, with a pair of Mother’s red tights cut down for stockings (which looked as though they were pleated), was called ‘Sir Francis Drake’.

At the depth of this dolorous period, Mother began to develop migraine headaches and was forced to give up her needlework, and for days was obliged to lie in a dark room with tea-leaf bandages over her eyes. Picasso had a blue period. We had a grey one, in which we lived on parochial charity, soup tickets and relief parcels. Nevertheless, Sydney sold newspapers between school hours, and though his contribution was less than a drop in the bucket, it did give a modicum of aid. But in every crisis there is always a climax–in our case this crisis was a happy one.

One day while Mother was recovering, with a bandage still over her eyes, Sydney came bursting into the darkened room, throwing his newspapers on the bed and exclaiming: ‘I’ve found a purse!’ He handed it to Mother. When she opened it she saw a pile of silver and copper coins. Quickly she closed it, then fell back on the bed from excitement.