the last book I ever read (Chess Story by Stefan Zweig, excerpt six) 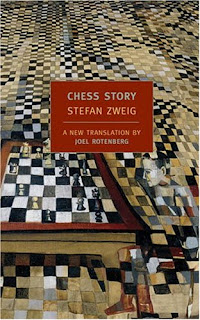 The next day, we assembled in the smoking lounge punctually at the agreed-upon hour of three o’clock. Our group had grown to include two more lovers of the royal game, two ship’s officers who had requested leave from duty so that they could watch the tournament. Even Czentovic did not keep us waiting as he had the previous day, and after the obligatory choice of colors the memorable game between this homo obscurissimus and the renowned world champion began. I regret that it was played for such thoroughly incompetent spectators and that its course is as lost to the annals of chess as Beethoven’s piano improvisations are to music. On the succeeding afternoons we put our heads together to try to reconstruct the game from memory, but without success; we had probably been too intent on the two players to follow the progress of play. For the contrast in the two players’ intellectual constitutions became more and more physically evident as the game proceeded. Czentovic, the old hand, remained stock-still the whole time, looking fixedly and severaly down at the board: for him thought seemed to be close to physical exertion, demanding the utmost concentration in every part of his body. Dr. B. on the other hand moved completely freely and naturally. As a true dilettante in the best sens of the word, one who plays for the pure delight—that is, the diletto—of playing, he was utterly relaxed physically, chatting with us during the early breaks to explain the course of the game and casually lighting a cigarette. When it was his move he only glanced at the board. Each time he seemed to have been expecting his opponent’s play.