the last book I ever read (The Friend: A Novel by Sigrid Nunez, excerpt seven) 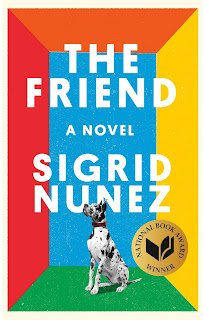 “I put him in a kennel,” she says, bristling at my tone, “because I didn’t know what else to do. You can’t explain death to a dog. He didn’t understand that Daddy was never coming home again. He waited by the door day and night. For a while he wouldn’t even eat, I was afraid he’d starve to death. But the worst part was, every once in a while, he’d make this noise, this howling, or wailing, or whatever it was. Not loud, but strange, like a ghost of some other weird thing. It went on and on. I’d try to distract him with a treat, but he’d turn his head away. Once, he even growled at me. He did it sometimes at night. It would wake me up, and then I couldn’t get back to sleep. I’d lie there listening to him until I thought I’d go mad. Every time I managed to pull myself together, I’d see him there waiting by the door, or he’d start keening like that, and I’d fall apart again. I had to get him out of the house. And now that he’s been gone, it would be cruel to bring him back. I can’t imagine him ever being happy in that house again.”