the last book I ever read (Blue Angel: A Novel by Francine Prose, excerpt two) 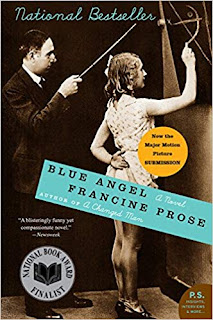 from Blue Angel: A Novel by Francine Prose:

The emergency room wasn’t crowded. The nurse—that is, Sherrie—walked him in to see the doctor, who was practically delirious because the patient who’d just left was Sarah Vaughn. The doctor wanted to talk about Sarah’s strep throat and not about what turned out to be Swenson’s middle-ear infection. Swenson thanked him, stood, and hit the floor. He’d woken with Sherrie’s hand on his pulse, where it’s been ever since. That’s what he used to say when he told this story, which he hardly ever does anymore since they no longer meet new people who haven’t heard it. And Sherrie used to say, “I should have known not to fall in love with a guy who was already unconscious.”