the last book I ever read (Thirteen Ways of Looking by Colum McCann, excerpt three) 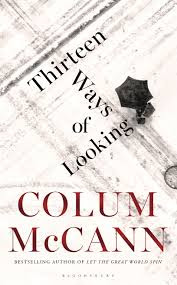 from Thirteen Ways of Looking by Colum McCann:

One of the things he used to love about New York City was the sheer bravado of it all. It used you up, spat you out. But the more the years went on, the more he began to think that he’d like a little respect from it. He had, after all, put his time in. Sat on the bench. Went to party meetings. A Supreme Court justice. A fancy title, but in reality he got every case under the Brooklyn sun, a clearing house, really, for murders, mobsters, shysters, shucksters. The random stabbings. The premeditated takedowns. Probate matters. Injunctions. Rescissions. An endless ream of paperwork. He stayed within the system even at the worst of times. Never strayed. At half the salary he would have made if he had gone into corporate law. After all that he would have liked just a little ripple of thanks from the peanut gallery. A moment longer in the crosswalk, please. He put his career as a lawyer in the bin for a life of public service, and what did he get? Some fresh young tchotchke in a black SUV with New Jersey license plates looking as if she’d like nothing more than to flatten him in one fell swoop. Windshield wipers slapping back and forth. Her petulant glare. Her lip gloss shining. An ex-Juicy. Drumming her fingers on the steering wheel. Don’t think I don’t see you, young lady. Just because I’m going along here as slow as molasses doesn’t mean that I’m not aware that you would very much like to put the pedal to the metal, scoop up poor Sally in the process, and drag us along Eighty-sixth Street, hanging to your bumper. A bit of respect, please. Objection sustained. There was a case he handled once of a kid from Bed-Stuy who was tied to the back of a garbage truck and dragged through the streets, he had been left lying on the ground for two hours afterwards, all the evidence was there but the jury wouldn’t convict. Rephrase. Move on. It was hard to leave a case like that behind. Haunted him for years. A young black boy, skidding along. Brutal days.