the last book I ever read (Pat Conroy's My Losing Season, excerpt eight) 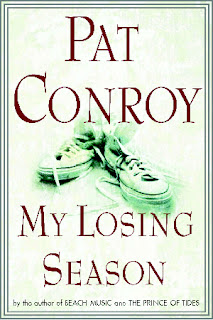 As Moates came toward me again and again, the one thing I knew for sure was that I would not have the help of my teammates. They had their men to guard and I had Johnny Moates. What they did not have was every other player on the Richmond team trying to free their man for a jump shot. I knew that Johnny, a shooter of immense gifts, would never take me to the hoop. His was a long-range game. He possessed the oddest jump shot I have ever seen but it was deadly. Moates would go off a double pick set on my right, and I would fall a step behind him. In that brief moment, Moates would take to the air in a mongoose-quick movement and bring the ball over his head and then launch it toward the basket with an unconventional high arching shot. I had my hand in Moates’s face the whole night, which made almost no difference to him. His shot would soar toward the rafters, go higher than any jump shot I had ever seen, backspinning beautifully, until the laws of gravity brought the ball rippling through the net with that sweetness of sound—the swish, like a flower inhaling grass.