the last book I ever read (Frank's Home by Richard Nelson, excerpt three) 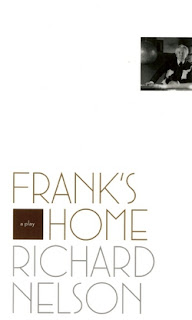 from Frank's Home by Richard Nelson:

FRANK: Mister Millard called me one day. Fit to be tied. You could feel the steam coming through the telephone. “There’s a leak right over my desk! It’s leaking on my desk!” You know what I said to Mister Millard? (Turns to Kenneth) Move the desk.

LLOYD: I never thought that was funny. Leaking roofs aren’t funny for the people who live under them. And they certainly aren’t funny now. With a collapsed hotel in Tokyo, and god knows how many people dead. (Pause) But my father doesn’t care about this. Look at him, is that a remorseful man?

FRANK: Lloyd was in charge of oversight; he was here while the Millard house was being built.

LLOYD: It wasn’t the construction.