the last book I ever read (Rabih Alameddine's An Unnecessary Woman, excerpt four) 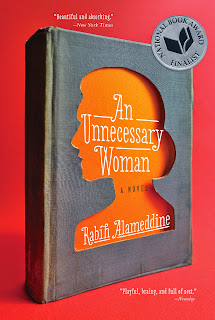 Ever the autodidact, I used his store to teach myself. When he opened for business, I knew little about music. I kept track of mentions in the novels I read. For example, I first heard of Mozart’s Sinfonia Concertante in Styron’s book Sophie’s Choice—a beautiful if somewhat soppy novel, and an unbearable film. I heard of Kathleen Ferrier when Thomas Bernhard mentioned her uplifting rendition of Mahler’s Das Lied von der Erde in Old Masters.

In my thirties all I understood was Chopin, glorious Frédéric. To thank me for finding a rare book, a college student offered me an invaluable gift, a double album of Artur Rubinstein playing Chopin. I didn’t have a record player at the time and had to save up before I was able to listen to it. Once I did, Artur’s spirit wafted through my home. I played my record over and over and over and over. I bought a cleaning and care kit for albums. Once a week I delicately wiped the damp cloth across the disc to ensure it remained playable for eternity. It was the only album I had for years, and the only music I listened to. To this day, I can probably whistle the melody of Ballade no. 1 in G Minor without having to think about it. I became a Chopinophile.

Even now, I think that if I’d never listened to anything else, I’d still consider myself a lucky human being. This was Rubinstein. This was Chopin. Pole playing Pole. But I had a yearning. Sometime in the early eighties, while my city was self-immolating, while everyone around me was either killing or making sure he wasn’t going to be killed, I decided it was time I taught myself how to listen to music.