the last book I ever read (Linn Ullmann's The Cold Song, excerpt one) 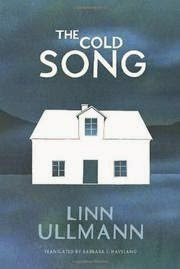 And that was the moment when Christian came up with the idea of burying treasure instead—as a symbol of true and everlasting friendship. It was simple: All three of them would have to offer up one thing, and that thing had to be precious, it had to be a sacrifice. No mingling of blood, no cuts or grazes, but stuff, valuable stuff, buried deep in the ground, as a symbol of their commitment to each other, to friendship, and to Liverpool F.C.