the last book I ever read (Exorcism: A Play in One Act by Eugene O'Neill, excerpt two) 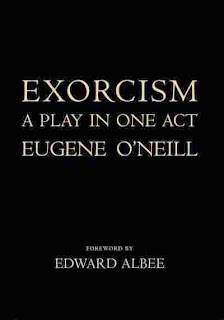 from Exorcism: A Play in One Act by Eugene O'Neill:

NED
Exasperated—throwing away the lighted match with which he has not yet lit his cigarette.

He loses control over himself and rages hysterically at the astounded and frightened Jimmy.


I’ll be damned if I’ll stand for listening to that story again! No! Oh, I know you too well! I can see it coming, that story you’ve told me a thousand times. You always start in that way. But you’re not drunk now and you’ve no excuse for telling it; and I’m not drunk and so I won’t endure listening to it! You’re worse than Major Andrews downstairs who insists on showing me the scar on his leg when he’s on his pension drunk every month. I supposed you think yours is a wound, too, you sentimental rabbit! Of all the abject illusions! Listen to me! I’ll tell you the truth for once in your life. By your own story, a thousand times retold, you prove that that wife who ran away from you seven years ago was a worthless nonentity—and guilty in the bargain!