the last book I ever read (CivilWarLand in Bad Decline by George Saunders, excerpt six) 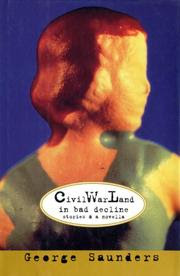 from CivilWarLand in Bad Decline by George Saunders:

Then the Perimeter Violation Alarm sounds. Lydia rushes out ahead of me, gnawing on a roaster and shading her lidless eyes. Per specs we dash to the front gate, where a dozen members of Austerity are singing minor-key hymns and throwing buckets of black paint at our retaining wall. As usual one of them is dressed as Death Eating Chips to protest the reemergence of wasteful packaging practices. Austerity considers us decadent. They hate the fact that we market opulence. They kill a cow per family per year and use every single part. They make candles from the bone marrow and pudding from the brains. They boil the fat to make soap and use the leftovers to grease their looms. Their faces are pale and they have bony knuckles from so often going around with their fists clenched. The women all look depressed and wear bonnets. In their camps everybody works. The children work and the elderly work and the handicapped work. At one camp they had a baldheaded lunatic who paced and paced while reciting Browning, so they tethered him to the water well and he wore a circular trough into the ground, but not before producing hundreds of useful gallons.