the last book I ever read (Tenth of December by George Saunders, excerpt one) 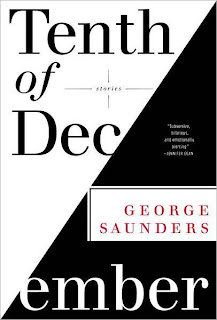 We left home, married, had children of our own, found the seeds of meanness blooming also within us. Dad began dressing the pole with more complexity and less discernible logic. He draped some kind of fur over it on Groundhog Day and lugged out a floodlight to ensure a shadow. When an earthquake struck Chile he laid the pole on its side and spray-painted a rift in the earth. Mom died and he dressed the pole as Death and hung from the crossbar photos of Mom as a baby. We’d stop by and find odd talismans from his youth arranged around the base: army medals, theater tickets, old sweatshirts, tubes of Mom’s makeup. One autumn he painted the pole bright yellow. He covered it with cotton swabs that winter for warmth and provided offspring by hammering in six crossed sticks around the yard. He ran lengths of string between the pole and the sticks, and taped to the string letters of apology, admissions of error, pleas for understanding, all written in a frantic hand on index cards. He painted a sign saying LOVE and hung it from the pole and another that said FORGIVE? and then he died in the hall with the radio on and we sold the house to a young couple who yanked out the pole and left it by the road on garbage day.