the last book I ever read (Rabbit, Run by John Updike, excerpt six) 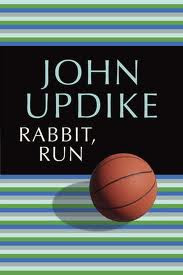 Springer doesn’t answer; Harry goes out through the sunporch, so he won’t have to glimpse Mrs. Springer’s face again, and around the house and walks home in the soupy summer dark, which tinkles with the sounds of dishes being washed. He climbs Wilbur Street and goes in his old door and up the stairs. There is still that faint smell of something like cabbage cooking. He lets himself into the apartment with his key and turns on all the lights as rapidly as he can. He goes into the bathroom and the water is still in the tub. Some of it has seeped away so the top of the water is an inch below a faint gray line on the porcelain but the tub is still more than half full. A heavy, calm volume, odorless, tasteless, colorless, the water shocks him like the presence of a silent person in the bathroom. Stillness makes a dead skin on its unstirred surface. There’s even a kind of dust on it. He rolls back his sleeve and reaches down and pulls the plug; the water swings and the drain gasps. He watches the line of the water slide slowly and evenly down the wall of the tub, and then with a crazed vertical cry the last of it is sucked away. He thinks how easy it was, yet in all His strength God did nothing. Just that little rubber stopper to lift.