the last book I ever read (The Good Son: The Life of Ray "Boom Boom" Mancini, excerpt three) 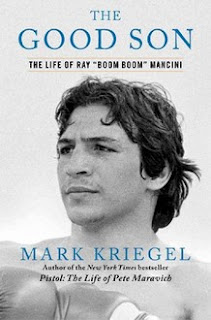 Ninety seconds into the fight, Ray had a cut above his left brow. Frias was a bloody mess, though most of it coming from a gash on his cheek and the bridge of his nose. In the third minute, Ray floored Frias with a left hook.

Frias rose at the count of seven, with referee Richard Green inspecting the fighter before allowing him to continue. It was the correct decision. Surely, the champion had something left.

Unfortunately for Frias, Ray wouldn't let him show it. What followed the fight's resumption were thirty-six unanswered blows. As the onslaught began, mere eagerness gave way to frenzy, with Ray hauling off, throwing roundhouse punches and Frias again on the ropes. Frias's last moments as a champion were helpless ones. Green stopped the fight with six second remaining in the round. Those six seconds might've put as many years on Frias's life. "I don't care how many seconds were left," said the referee. "I looked into Frias's eyes and they were going round and round. I notice he didn't complain when I stopped it."