the last book I ever read (Zadie Smith's The Autograph Man, excerpt one) 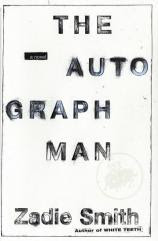 from The Autograph Man by Zadie Smith:

When Alex was eleven, when Li-Jin first began to experience his headaches, a Chinese doctor in Soho diagnosed it as the influence of Alex-Li obstructing his father's qi. This doctor told Li-Jin he loved his son too much, loved him like the widower whose child is the last "mu qi" (maternal air) was excessive, blocking his "qi-men" (air gates). This had caused the disturbance. Nonsense. Li-Jin rebuked himself for ever succumbing to the superstitions of his own Beijing childhood; he never went to see this man or any other Chinese doctor again. Air gates? Everybody in Mountjoy had a headache. Plane noise, pollution, stress. The unholy trinity of Mountjoy life. It was vanity, surely, to assume that he had been singled out for something special, for the rare tumor, the underresearched virus. Vanity! Why would it be anything more? For a year after the encounter this clever doctor behaved like any one of his stupid patients. Telling himself it was nothing. No tests, continuous pain, muddling on. Even though, somewhere in him, he knew. He always knew.