the last book I ever read (Twilight of the Elites, excerpt five) 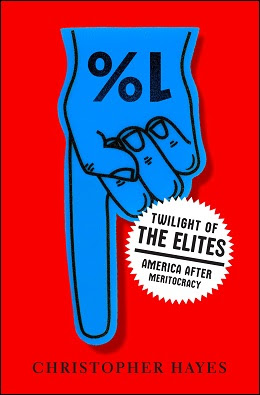 from Twilight of the Elites: America After Meritocracy by Christopher Hayes:

The members of today's elite have never been farther from the median worker and closer, in the literal sense, to their fellow meritocrats. And because of the primacy of money in our post-meritocratic culture, there is a ready path by which one can trade certain kinds of power for others: money can purchase influence, and influence can later be cashed out.

Just look at our elected officials. Getting elected to office requires such a large sum of money that you more or less have to be rich yourself so you can both fund your own campaign and know enough fellow rich people who can raise money for you. When recruiting candidates for the House of Representatives, the Democratic Congressional Campaign Committee (DCCC) looks for aspirants to raise so much money, so early--$250,000 in the first quarter the candidate has declared--that it's almost impossible to do without a massive personal or family bank account. "They'll say to you, you gotta be hitting 250," says one former congressional candidate. "And I was struggling to hit 100,000. You have to think out the actual economics of it. If you don't have a big bank account, then raising money has to be your full-time job," which means forfeiting your actual job and the income from that, "and if it's not going to be your full-time job, you better know a huge, huge number of rich people."

The results of this funneling process are clear in the composition of the country's least-trusted institution, the United States Congress: nearly half of all members of Congress have a net worth north of a million dollars, compared to just one in twenty-two households nationwide. Between 1984 and 2009, while the median net worth of American households remained essentially unchanged, the median net worth of members of the House of Representatives rose by 260 percent. Not only did the rich get richer, so did Congress.