the last book I ever read (In Search of Cleo by Gina Gershon, excerpt one) 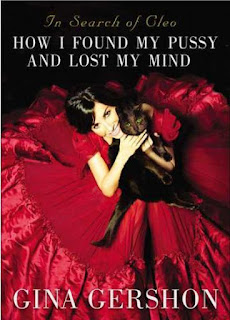 from In Search of Cleo: How I Found My Pussy and Lost My Mind by Gina Gershon:

When I was just twenty years old my father died suddenly of a massive heart attack. Just like that, his heart stopped, and in that very same instant mine split in two. Slowly and tenuously, time and the thread of life began to stitch back together my ticker, and I tailored a world that I could safely wrap myself back up in. Years later, when the big breakup came with my boyfriend who I'd been living with for the past eight years, it was as though the crack reopened and deepened into a crevice of sadness. Before I could mend this wound, my uncle Jack (a bit of a second father to me) died unexpectedly, filling that sorrowful crevice with a cement-like heaviness. I happened to be in St. Petersburg at the time, and luckily plenty of vodka was easily accessible. Thankfully, big protective Teddy was there with me to hold my hand all the way back to L.A., doing his best as always to make me feel better. This was something he was extremely good at. He would compassionately listen to me, throw up my sorrows and fears, and then eventually get me to laugh about something ridiculous. He even had the ability to make me believe that I would fall in love again, convincing me at times to "not worry," that he'd help me "find The Guy." Meaning the Right Guy. The Guy who would help me heal and make my heart smile again. Fill it up with emotional helium.

Then a few weeks after returning from Russia to bury my uncle, Teddy--like my father--died suddenly of a massive heart attack. I was devastated. The crevice had now widened into a gaping black hole of despair. I literally, at times, was having a hard time breathing. I spent long, endless nights with only Cleo and the darkness, trying to fend off the unbearable, terrible anguish. Cleo would lay on my chest, over my heart, and lick my wounds, and oddly enough, it helped. And now Cleo was gone, too. Cleo, the only remaining piece of my heart that was still intact, was wandering somewhere, lost in the streets of L.A. I had no choice but to find him.