the last book I ever read (Leonora Carrington's Down Below (NYRB Classics), excerpt seven) 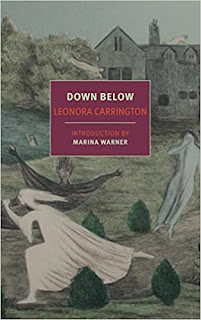 A few days later Don Luis proposed to me my first outing: we drove out in an automobile to pay some calls. We went to see a pregnant young lady to whom he had to give an injection (I believed it would be an injection of Cardiazol, and that I was the child she was bearing). She gave me a pack of cigarettes and they left me alone in a dark drawing room. I rushed to the bookcase and found a Bible, which I opened at random. I happened on the passage in which the Holy Ghost descends upon the disciples and bestows upon them the power to speak all languages. I was the Holy Ghost and believed I was in limbo, my room—where the Moon and the Sun met at dawn and at twilight. When Don Luis came in, accompanied by the young lady, she spoke to me in German and I understood her, though I do know know the language. She gave me the Bible, which I pressed under my arm, eager to return home and hold my Stick of Philosophy, which Don Luis had not allowed me to take along.

When I entered the library of my pavilion, I found Nanny armed with my Stick. She needed it, she said, to defend herself against the demented inmates. How could she expect to put to such use my dear companion, my surest means of Knowledge? At that moment I hated her.