the last book I ever read (Eliza Reid's Secrets of the Sprakkar, excerpt four) 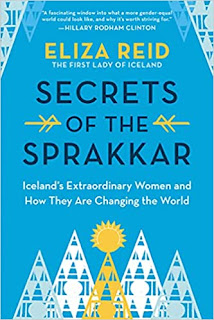 It’s true that media coverage was and is significantly more low-key in Iceland. But since becoming First Lady, I had learned to morph from Eliza changing wet bedsheets and wiping stray child snot off the sofa in the morning to Eliza putting on a crisp suit or to-the-floor gown later and having the image appear in the paper, on television, and online. And as a woman who had arrived in the spotlight less with my own identifying characteristics than as someone’s spouse, I began to learn both how I could use that to my advantage to carve the image of how I wanted to be seen and how society was already imposing some expectations of their ideal of a First lady through media coverage.

Really, though, why should I care how the media portrays me? It’s not mere vanity. (That said, please see comment above on googling myself.) It’s important how all women are represented in the media. For “there lies the buried dogs” or the crux of the matter: the media is largely our window on the world, and that includes gender equality. When media interviews are predominantly with men, when the editors and the photographers and the broadcasters and the writers are mostly of one gender or don’t represent in other ways the diversity of the society for whom they claim to speak, we lose insight and narrow our subconscious assertions about gender and diversity. In the comments section and in social media that assure everyone with a smartphone that the world’s population is desperate to hear what they have to say about everything, statistics show that women are judge more harshly and subjected to more threats of violence and attacks than men, discouraging them from further engagement and thereby effectively silencing them. This is as much of a challenge in Iceland as it is elsewhere.

And yet, international media outlets have often portrayed Iceland in astonishingly oversimplified terms, sacrificing the nuances of a nation that few know intimately for the allure of a good (if wildly inaccurate) story. According to too many parachute journalists, Iceland is a gender paradise, a country where we can rest on our laurels as we bask in the benefits of a near-perfect nation where we all have a quaint belief in elves, jailed all our bankers after the economic collapse, crowd-sourced a constitution that protects the Earth as well as humanity, and where women and men live in complete harmony. (Please excuse the hyperbole.)