the last book I ever read (Meyer: A Novel by Stephen Dixon, excerpt three) 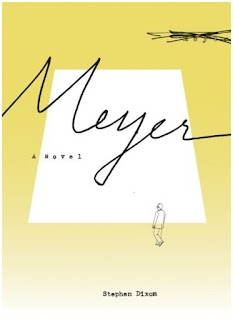 from Meyer: A Novel by Stephen Dixon:

Phone rang at home. He was at his worktable in the bedroom and picked up the receiver and said hello. “Good morning. May I speak to Sandra,” his father-in-law said. “I have very bad news for her” “What is it?” and he said “I have to tell Sandra first.” “She can’t come to the phone right now. And we left the portable handset off the receiver all night and it won’t be working for another hour.” “You can’t drag the phone you’re talking to me on to wherever she is?” “Cord doesn’t reach the bathroom.” “Her mother killed herself a half-hour ago. I’m waiting for the police and firemen now. That’s what they said would come when I call 911. I discovered her in her bathroom. She took pills and vodka and put a bag over her head and left a note with how she did it, I suppose to make certain everyone knew I had nothing to do with it. Tell Sandra to stop whatever she’s doing and come to the phone. She has to for me. I’m in so much shock I can barely move.” “I’m so sorry, Boris, so sorry. I don’t know what else I can say. Just a moment. I’ll get her, or maybe the handset’s working now.” He picked it up and pressed the Talk button. No dial tone and the window didn’t light up. “It’s still not working. Needs more recharging. I’ll get her, don’t worry. Hold on.” He went to the bathroom door, knocked on it and said “Sandra, your dad’s on the phone. It’s about your mother. He has to speak to you right away.” “It sounds bad. What happened?” and he said “He wants to tell you himself.” “He must have told you, so tell me.” “Can I open the door?” “Yes.” He opened it and said “I’m sorry, sweetheart. Your mother killed herself half an hour ago, or he probably means that’s when he found her.” “Portable still not working?” “Yeah.” She got off the toilet, flushed it and went to the phone.