it was Friday, so I talked to retired NFL players all day long 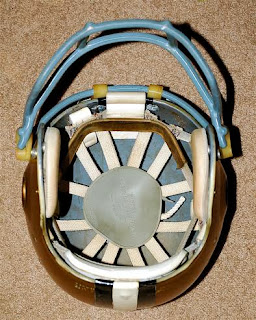 yesterday I interviewed four former four former NFL players who have joined the lawsuit against the League over head injuries for our continuing Deadspin series. the youngest of the four retired as a player in 1999. the oldest entered the League in 1966, and this is the inside of his New Orleans Saints helmet from right around 1968.

my thanks to all for a very informative day.