the last book I ever read (Happening by Annie Ernaux, Winner of the 2022 Nobel Prize for Literature, excerpt two) 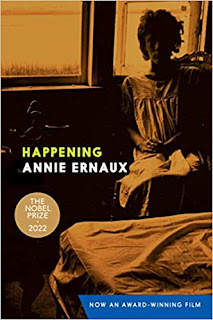 from Happening by Annie Ernaux, Winner of the 2022 Nobel Prize for Literature:

It has cost me quite some effort to resist the powerful hold of these images and leave behind the pale winter sunshine flooding the Place Saint-Marc in Rouen, the lyrics of Soeur Sourire or even the hushed atmosphere of the medical office on the Boulevard de l’Yser, belonging to a physician whose name I have long forgotten. To capture that invisible, elusive reality unknown to memory that had sent me scouring the streets in search of an unlikely doctor—the law.

The law was everywhere. In the euphemisms and understatements of my diary; the bulging eyes of Jean T; the so-called forced marriages, the musical The Umbrellas of Cherbourg, the shame of women who aborted and the disapproval of those who did not. In the sheer impossibility of ever imagining that one day women might be able to abort freely. As was often the case, you couldn’t tell whether abortion was banned because it was wrong or wrong because it was banned. People judged according to the law, they didn’t judge the law.