the last book I ever read (Percival Everett's I Am Not Sidney Poitier, excerpt seven) 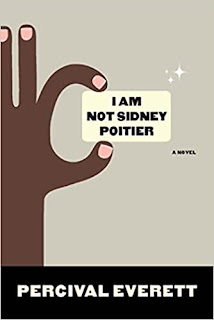 Everett, as usual, had been of no help whatsoever. He insisted as I left that I take the doughnuts, sprinkles and all. He said that they would kill him, but he’d be happy to know I was enjoying them. I took the doughnuts and ate them as I drove back to campus and my dorm. The place was so empty, so quiet and dead, that there was a sudden and strange appeal to it, but I refused to be seduced. I would have liked to talk with Ted, but he was off at his ranch in Montana doing something with buffaloes. And what would he have said to me anyway except, “Why is it that the buffalo’s head is so disproportionately large?” or something like that. I’d always wanted to see Turner and Everett meet, imagined it a little like Perry Como performing with Ornette Coleman. I resolved as I walked across campus to again attempt my drive west. Only this time I would stick to the interstate system, the homogeneous tangle of the ribbons that made up the fifty-first state. I would observe each and every traffic rule and avoid people whenever possible. I realized that I could simply board a plane and fly to California, but being there wasn’t the point, getting there was what I was after. I didn’t know anyone there or what I would do and so the drive would afford me time to formulate some kind of plan. Also I still harbored the young, romantic, naïve, and stupid notion that a cross-country trek would be a valuable learning experience, a rite of passage. That night I packed up my Buick Skylark and headed west once again, my heart pounding, my palms sweating against the plastic of the steering wheel, a thermos of coffee beside me next to a sack of my newest addiction, doughnuts with sprinkles.