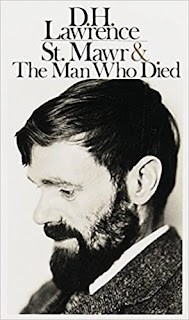 It was America, it was Texas. They were at their ranch, on the great level of yellow autumn, with the vast sky above. And after all, from the hot wide sky, and the hot, wide, red earth, there did come something new, something not used up. Lou did feel exhilarated.

The Texans were there, tall blond people, ingenuously cheerful, ingenuously, childishly intimate, as if the fact that you had never seen them before was as nothing compared to the fact that you'd all been living in one room together all your lives, so that nothing was hidden from either of you. The one room being the mere shanty of the world in which we all live. Strange, uninspired cheerfulness, filling, as it were, the blank of complete incomprehension.

And off they set in their motor-cars, chiefly high-legged Fords, rattling away down the red trails between yellow sunflowers or sere grass or dry cotton, away, away into great distances, cheerfully raising the dust of haste. It left Lou in a sort of blank amazement. But it left her amused, not depressed. The old screws of emotion and intimacy that had been screwed down so tightly upon her fell out of their holes, here. The Texan intimacy weighed no more on her than a postage stamp, even if, for the moment, it stuck as close. And there was a certain underneath recklessness, even a stoicism, in all the apparently childish people, which left one free. They might appear childish: but they stoically depended on themselves alone, in reality. Not as in England, where every man waited to pour the burden of himself upon you.