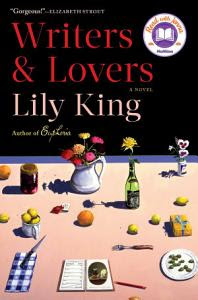 from Writers & Lovers: A Novel by Lily King:

Muriel calls me over and makes me squeeze on the couch between her and her grad school friend George, who turned up unexpectedly that afternoon, which apparently he does from time to time. She’s told me about him. He’s unhappy and lives in North Carolina. We’re pressed together on the couch and have to lean away from each other to be in focus. He has a smooth plump face and gold-rimmed glasses. Big round eyes hrough the lenses.

Harry is on the other side of Muriel, and they have enhanced the intensity of their conversation to force George and me to talk to each other. I already know part of his story. He and his wife arrived in Ann Arbor together for grad school. He was in the fiction program with Muriel, and his wife was in nonfiction. During their second year there she started getting migraines and was sent to a specialist. At her third appointment, the doctor locked the door and they had sex. On the examining table with the crinkly paper. The doctor remained standing the whole time. I shouldn’t know these details, but I do. They’re all writers in the chain—his wife, George, and Muriel—so the particulars didn’t get lost. Now the wife is migraine-free and living with the doctor, and George is heartbroken and teaching freshman comp at UNC-Greensboro.