the last book I ever read (Patrick Radden Keefe's Say Nothing: A True Story of Murder and Memory in Northern Ireland, excerpt twenty) 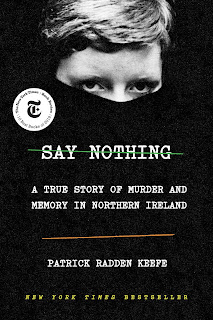 from Say Nothing: A True Story of Murder and Memory in Northern Ireland by Patrick Radden Keefe:

In one of his conversations with Anthony McIntyre, Brendan Hughes said something similar, in the form of a metaphor. Think of the armed struggle as the launch of a boat, Hughes said, “getting a hundred people to push this boat out. This boat is stuck in the sand, right, and get them to push the boat out and then the boat sailing off and leaving the hundred people behind, right. That’s the way I feel. The boat is away, sailing on the high seas, with all the luxuries that it brings, and the poor people that launched the boat are left sitting in the muck and the dirt and the shit and the sand, behind.”