the last book I ever read (Florida by Lauren Groff, except three) 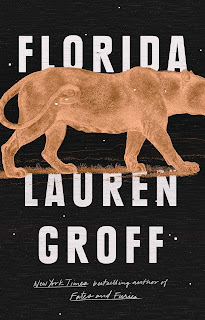 from Florida by Lauren Groff:

It began with the chickens. They were Rhode Island Reds and I’d raised them from chicks. Though I called until my voice gave out, they’d huddled in the darkness under the house, a dim mass faintly pulsing. Fine, you ungrateful turds! I’d said before abandoning them to the storm. I stood in the kitchen at the one window I’d left unboarded and watched the hurricane’s bruise spreading in the west. I felt the chickens’ fear rising through the floorboards to pass through me like prayers.

We waited. The weatherman on the television repeated the swirl of the hurricane with his body like a valiant but inept mime. All the other creatures of the earth flattened themselves, dug in. I stood in my window watching, a captain at the wheel, as the first gust filled the oaks on the far side of the lake and raced across the water. It shivered my lawn, my garden, sent the unplucked zucchini swinging like church bells. And then the wind smacked the house. Bring it on! I shouted. Or, just maybe, this is another thing in my absurd life that I whispered.