the last book I ever read (Shirley Jackson's The Haunting of Hill House, excerpt three) 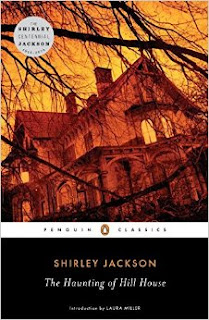 “Precisely. Have you not wondered at our extreme difficulty in finding our way around? An ordinary house would not have had the four of us in such confusion for so long, and yet time after time we choose the wrong doors, the room we want eludes us. Even I have had my troubles.” He sighed and nodded. “I daresay,” he went on, “that old Hugh Crain expected that someday Hill House might become a showplace, like the Winchester House in California or the many octagon houses; he designed Hill House himself, remember, and, I have told you before, he was a strange man. Every angle”—and the doctor gestured toward the doorway—“every angle is slightly wrong. Hugh Crain must have detested other people and their sensible squared-away houses, because he made his house to suit his mind. Angles which you assume are the right angles you are accustomed to, and have every right to expect are true, are actually a fraction of a degree off in one direction or another. I am sure, for instance, that you believe that the stairs you are sitting on are level, because you are not prepared for stairs which are not level—“

They moved uneasily, and Theodora put out a quick hand to take hold of the balustrade, as though she felt she might be falling.